The postman delivered my Russian DVD of Highlander: The Source today. Oddly it comes without any special features. :) However I was slightly alarmed to open the jewel case and find no DVD - until I realised those whily chaps had put the DVD in a separate envelope inside the DVD case to prevent it getting loose or scratched. Actually a very sensible idea for a postal DVD company.

I'd read some pretty negative reviews of it, and had actually downloaded it before hand but managed to keep my willpower and only peaked at the film before the DVD arrived at my door. Then after digesting the Source and a roast dinner I thought I'd share my thoughts.

Overall the Source is not bad, it's not as good as Endgame as it lacks any attempt at real depth. It's pretty much a no-brainer 90 minute action movie - there's not much sophistication to the plot.

Pretty much the story is that it is the near future. The world is falling apart, or at least Eastern Europe is. Duncan MacLeod is depressed because his latest wife has left him to go seek something mysterious. He is seemingly tracking her through "Eastern Europe" (at least that's what the subtitles said, it's actually Lithuania) when he sees the results of a massive quickening, meets the Immortal who received it, gets his ass handed to him by said immortal and escapes, falling in with Joe Dawson and Methos from the TV show, along with his wife Anna, a cockney stereotype immortal called Reggie and Cardinal Giovanni who are all looking for the Source. They all seem pretty up on where the Source is, and the immortal who is guarding it - the Guardian. They don't seem to waste much time discussing it or explaining how they suddenly know all this stuff that they never mentioned in the TV series before going off on a modern day Lord of the Rings style jaunt.

Suffice it to say by the end only Duncan and Anna are left, and he has to claim the power of the Source to defeat the Guardian. The final fight is very matrixy, but seems okay, if a little anti-climactic. 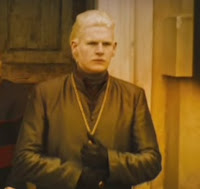 Overall the acting seems pretty good. With the exception of Joe the rest of the cast are British or European and give a good performance. The only character I felt got short shift was Cardinal Giovanni (pictured) - how exactly he became a catholic cardinal is a mystery - at first he appears serene and wise, if a little arrogant, but before long he's whimpering, selling everyone down the river and claiming he's The One and that God shines on him, and generally being an unhelpful twat that reminds me of a certain someone I know in real life. Not exactly cardinal material, much less the kind of material that survives for thousands of years - if he'd obviously become genuinely unhinged by certain events in the film it'd be nice if they made it clearer.

Anyroads, nice no-brainer film, but no real depth that adds to the source material of Highlander. And some pros-and-cons...

Pros:
- No confusing flashbacks, or flashbacks within a flashback within a flashback. Endgame suffered from that problem.
- Good SFX (although the Source looks a little dodgy).
- Nice orchestral soundtrack
- Lots of Methos being Methos (albeit one who is trying to fill Duncan's shoes for most of the movie until Duncan gets his act together at the end).
- While some of the movie looks a little cheap it actually looks rather spectacular in places - there's a very nice monastery for example.

- The Guardian is goofy, like most Highlander villains. He even sings Who Want To Live Forever (admittedly better than the covering band).
- The story doesn't really begin. There's no indication as to how Methos et al. become aware of the Source given in 6 seasons of Highlander the Series it was never mentioned.
- No Scotland. This is supposed to be Highlander.
- No historical flashbacks bar 1 short one.
- No explanation of what the Source is. Given the film is The Source you'd at least have some inkling as to its nature beyond being some sort of powerful force.
- Maybe it's me but 90 minutes is too short for a film. This film needs a decent epilogue.
- Princes of the Universe : The Karaoke Mix. ARGH! And let's not even start on Who Wants To Live Forever.
Posted by Stuart at 7:42 PM

I´ve never been so scared into seeing a movie before. I love the the series, specially that 4th season episode "Homeland". Agh. No Scotland. Bleak future (why has to be in the future?). Me is very afraid.