I decided to enjoy a late lie, a shower and shave before putting on fresh clothes and going to work feeling respectable. Then came the knock at the door - which I opened assuming it was the postman who had somehow having ninja'd his way past the security door and was clutching some massive parcel he was unable to shove through my letterbox.

I was therefore somewhat surprised when it was the building maintenance chaps standing there, staring at me in my bathrobe. However this was better than last time when they knocked on the door at some ungodly hour, burst in and decided the best way to investigate the leak in my bathroom was to check out the bedroom where I was hastily changing to answer the door first.

Apparently after reporting my shower leaking in December my lottery numbers had come up and they were here to tear up my bathroom and replace the shower cubicle. The net result of this exchange was that they graciously allowed me twenty minutes to get ready I went to work looking like a hobo with 2 days worth of stubble, and in the first clothes I could find lying around. Using some of the 20 minutes to check the post I was somewhat disturbed by my present from mum and dad - a pair of pink lined rubber gloves complete with ring and pearls. As I walked to work I tried to contemplate the significance of this gift... were my folks indeed trying to say:-

I got into work and discovered a card on my desk. As Andy pointed out it was either from him or Ben. I'll let you guess who it was from, but let me give you a hint - it wasn't the tosser.

Work progressed a little slowly with only surly students making rather humorous errors in an effort to amuse me. After midday when I went upstairs for lunch and ate the most odd chicken baguette and drank a pint bought for me by the gracious Mr A. who let the rest of the staff know this was my birthday. This was followed at 1:30pm by me taking an extended lunch break and going to the student's union beer festival, which was cheap. 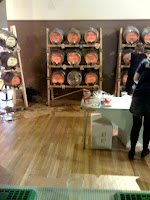 However I didn't have long to work - at 4:30pm I was dragged across the Student's Union for a pint, then back to the staffroom for another pint - the net result being I had consumed 5 pints while at work that day. That's probably not much compared to other folks, but at least Scott Adams would be proud I'd beaten the system. 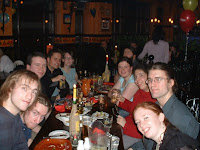 Amazingly still sober I staggered home at 6pm to quickly try out my new shower (which still leaks everywhere), shave and get ready for a nice meal at La Tasca. Which I had, and was very nice, despite people assuming I lost control of my camera after 2 pitchers of sangria. La Tasca's is very nice - and gets the seal of approval. Much tapas, sangria and weird cocktails later I collapsed at the far too respectable time of 2am.

So apologies for the long rambly post: in a nutshell very good birthday.
Posted by Stuart at 11:28 AM