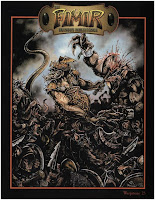 I'm normally not a fan of fan-material (except the Oerth Journal for Greyhawk which is brilliant) but as WFRP is effectively out of print except for 3rd Edition (which has its issues and is overdue a long review but suffice it to say is effectively a new game) it's worth pointing out 2 unofficial sourcebooks for WFRP2E.


Warpstone Issue 25 was entitled Fimir: Ruinious Inheritence and is essentially is a WFRP2E sourcebook for the one-eyed rapists (Fimir cannot reproduce amongst themselves and have to abduct human females) that were quietly dropped from Games Workshop's line in the early 90s due to being too 'risque'. Probably due to the whole rape thing. 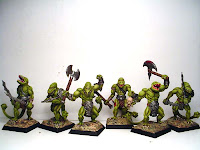 This is quite an interesting sourcebook, though it could be more professionally laid-out and less chatty. I've had a bit of a soft-spot for these guys in Heroquest, but they've all but disappeared now. The last scenario they appeared in was in the 90s and to be honest it would make a nice change from skaven being behind everything for them to crop up in an official scenario. As an aside, I'd love some bog-raider substitute minis (see left). 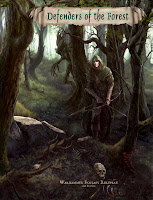 Defenders of the Forest came out today and is an unofficial but complete WFRP2E sourcebook for Wood Elves. This was a long overdue publication as an awful lot of the Bretonnian/Athel Loren connection was intended to be followed up in the elf sourcebook. You can get it here.

Elves have had a pretty rough time in WFRP with no source book to speak of. Dwarfs have a 3E book, as well as the excellent Dwarfs: Stone and Steel. It's a strange thing. A lot of people play wood elves as racist thugs who inexplicably travel through human territory despite hating humans. I'd see them more as the kind of fey types who could slaughter a village for logging but burst into manly tears because someone stood on a daffodil.

Previous WFRP editions assumed your elf PC was an 'urban' elf who was in some way assimilated into Imperial society, while WFRP 3E offers startup careers such as Wardancer that seem much more 'high-fantasy' than a human ratcatcher or road warden.

Wardancers are included in Defenders of the Forest but are not a basic career, an immensely good idea. The Kithband warrior career from the Core rulebook is and allows one to advance into Wardancer - a career I'd never noticed was missing from WFRP2E. Interestingly they get some magic advances (probably a typo).

I also rather like the fact that there is basically detailed gazetteers of the Wood Elf enclaves, allowing parties to actually explore Wood Elf territory, rather than having wood elf PCs trapse around the Empire stating how much they hate humans. Amusingly under the new rules wood elves also gain insanity points for extended periods away from the forests (1 point per month if they fail a will power test) that can lead to them being unable to return to their homeland permanently.
Posted by Stuart at 12:46 AM