I and my fellow droogs had a good trip to the sci-fi exhibits at the National Space Centre today. There was monsters, more monsters, Doctor Who, Firefly props (including Vera, Jayne's gun), a makeup exhibition where people were (slowly, makeup takes hours) assimilated into Borg. Given the first Borg took 2 1/2 hours of painstaking work I doubt Earth will be assimilated this century. 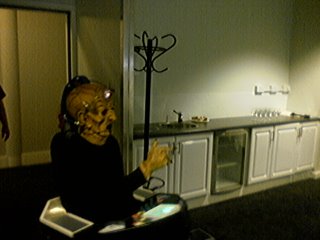 We attended an audience with Davros and even asked the legend in his own mind a question about holiday plans. He doesn't have any ever apparently. 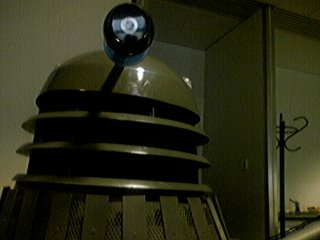 For my sins I was suckered by a Dalek for saying, "Extermination looks really painless. Being suckered like that guy in 'Dalek' looked really painful". Daleks are apparently tetchy but who knew? I was also exterminated at least on 3 separate occasions. At least 1 of those they weren't even aiming for me, but then when did you ever know a villain that could shoot straight? 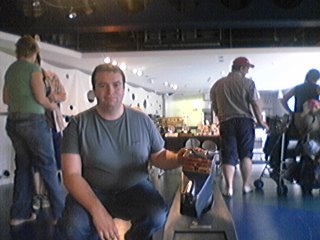 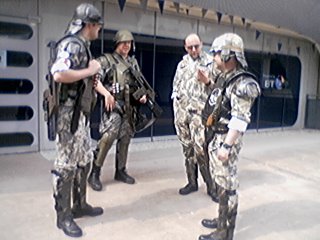 The last thing we did was go on the Alien Experience, recommended by Glen, who'd been on it previously. The thing is a 6 minute trip to the evil Weyland-Yutan's lesser known Leicester branch. It ended with us being chased by aliens and me yelling to a colonial marine to shoot a xenomorph that was about 3 feet away from me and said marine, and turning round in an airlock to be confronted by a squad of well armed marines. Thankfully they weren't American so there were no friendly-fire casualties.

My camera died this morning so all these photies are annoyingly from my mobile, but Claudia has much nicer photos that hopefully I'll upload at a later date.
Posted by Stuart at 9:22 PM

Ah but you actually got a picture of the colonial marines. Can I borrow it for show and tell purposes?

I've got 2 piccies of the marines, that's the best one. I'll send you the whole lot if you like when I get back, or you can just nick this one if you like.