The Sky's Not Quite The Limit

We continue our season of (hopefully funny) rants...

I've had a lot of workmen in the flat recently but none of them have managed to do any work, which is a bit of a shame as that was the sole reason I was calling them in.

On Friday I missed out on frisbee in the park to go for a 4pm appointment with the utilities guy in my apartment. When he finally turned up at 5:15pm he literally breezed into the flat and offered the following pearl of wisdom:-

Stu: "No shit Sherlock! Isn't that what I said was a problem? Does that mean we live in one of those weird parallel universes where Stuart is right? Even just once? Man - do you have the phone number for Rod Serling?"

Stu: "How totally unexpected! I'll eat microwaved slush for the next six days! Actually, take two weeks if you like, I'm off down the pub..."

That's how the conversation would've gone if I had a backbone and a temper. Clearly though the appliance guy was on some sort of meditative nirvana to make those kind of astute observations. Operating on a higher plane it would've been crass to bring him back to Earth with my vulgar cursing and swearing. So I simply said thanks and let him go. He had been here for a minute after all.

I was advised this morning the Sky guy would be round from 9:30-11:30. Nice vagueness there, but I decided to wait until 10am and then go to work if he hadn't shown up.

If the demonstrating gig ever gets boring, if I ever snap and try to insert a bookshelf up my co-worker's rectum, this Sky guy and I could clean up on the stand-up comic circuit. Seriously, the banter was fantastic. Morcambe and Wise, Two Ronnies, Monty Python, move over. Stu and Sky-Guy are the new act.

I mean with repartee like this, how could we fail?

Sky Guy: "You sir are the most fucking lucky person on the planet! You are so unbelievably fucking lucky! If I didn't have both hands full with this ladder I would shake your hand."

Sky Guy: "You might be the only flat on your fucking block to be able to get fucking Sky."

Stu: "Really, that's good, because with everything else like broadband or cable I've been ridiculously unlucky."

Sky Guy: "Yes, in fact if I climb up here and hold the dish in place I can see if you're getting a fucking signal you fucking lucky son of a gun!"

Sky Guy: "That's ok, you're getting no signal anyway."

Stu: "Arse! What if you point it over there where there's no buildings?"

Sky Guy: "Nah, I have to point it right at the building for some reason."


And that's pretty much how it happened. Almost verbatim. I think the Sky guy swore a few more times in a hilarious and whacky way.

The upshot is that I can't get Sky at my elevation so they will have to get in the Special HeIght Team (which doesn't hold much hope for me as it abbreviates to SHiT). On the other hand if I were to invite the installation guy around every evening after work I wouldn't need TV as I'd be very, very amused.

I think I'll be getting NTL although I might wake up Wednesday morning and find that a SWAT... sorry SHiT team are sliding onto the roof with ninja stealth. But I doubt it. Do you think they'll climb this building on a ladder? And put a dish on the right-most chimney? 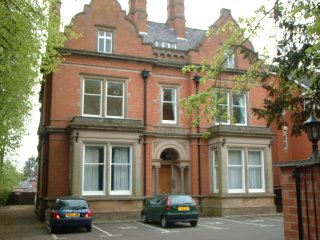 Other than that I've been in the pub a lot this weekend. Or off replacing broken things in the flat, like the iron without a stopper to prevent water spilling out of it.

Or my computer, which has decided to take more memory dumps in one day during games/mp3 playing than I take regular dumps in a week. I started to write my amazing novel (which I think is going to be one long rant) until I got half-way through page 1 and the computer blue-screened of death me, claiming the memory core needed dumping. Personally I took it as a sign my novel should never be written.

I think after four years the old girl needs to be taken round the back and shot under an unworking Sky dish pointing the wrong way. Anyone recommend a decent cheap base unit?
Posted by Stuart at 11:22 AM

I can get you a fairly cheap system, drop me a mail with how much you wanna spend and I'll see what I can put together...

I know nothing about PCs, but I know funny, and you, sir, you are funny. You suffer so I can laugh. Enjoy the karma...