In Which Our Hero Loses His Shirt, Regains His Vertigo and Goes North

Much to tell, but as I'm returning to Dundee via Edinburgh today I'm going to have to truncate.

Had a pretty interesting weekend last week. Friday was the Casino Night where once more bedecked in national dress I went to a casino and discovered the dress code was a little more lax than we were expecting. With a whiff of sleaze, smoke and desperation the place was interesting, and the meal we had was very American. I also lost money as usual which put me in a little bit of a foul mood - all too foul for the smart-witted cab driver on the way home who remarked on my kilt. Overall, good night, but I have crap luck even at Blackjack.

On Saturday I went to Stratford-upon-Avon is really nice. Terribly touristy, but very nice. We were shown round Shakespeare's House (pictured). Claudia went round the exhibit at a decent pace while we slow coaches were eventually prompted to go from the exhibit to the actual house by the security man who told us we had 15 minutes left to actually see the real attractions. 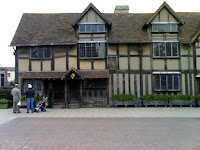 Inside the house we fell victim to the eager-guide. All the other guides, realising the lateness of the hour, looked at their watches and gave us minimal information on our surrounding, while eager-guide was all too eager to wax lyrical on the many subtleties of the house. This was great for us, but Claudia, now trapped in the house's gift shop while waiting on us overheard the rest of the staff grumbling about how we'd never leave because eager-guide was talking to us.

After that it was on to the RSC and their vertigo inducing balcony for a most excellent performance of Coriolanus, which was excellent and is very action packed in the first half for one of the Bard's wordy witticisms. It's the first Shakespeare play I've ever seen live and I really enjoyed it. 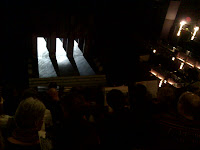 The rest of the week was equally manic. Work has been excessively hellish this week - it seems to be impossible to get anything done without someone banging on the door and one student even demanded to know my holiday plans so as to know my exact location and availability throughout their 5 week holiday. Needless to say I was not impressed! However I got through it all, though I would describe my mood as ratty at best by the end of it. I need a holiday.

Which is precisely what I will have. I'm off to Edinburgh for the Student Roleplaying Nationals. It's a misnomer as hardly anyone there is a student and I am allegedly represting DeMontfort University even though I am not a member of their society and I think I know exactly 3 people in my team. However the good and great of DURPS will be there, and I guess those loud weirdos from Stirling will be trying to attract as much attention as they can. In previous years it's been fun (though clearly in 2004 I was in a bad mood, thesis writing and no sleep y'know).

More excitement soon I promise!
Posted by Stuart at 12:09 AM