This week was the 25th anniversary of the Leicester Uni Computer Science department. It was also my 2nd anniversary of working there. That adds up to the total of my age. Go figure.

Celebrations involved plenty of entertaining lectures and some cakes bearing the likeness of the sundry buildings the department has been based in. However that is only the background for a more amusing tale - I spent most of these lectures trying to stop my anxiously growling stomach from heckling the speakers.

(But first, some cake. I think I wound up eating the student labs - which were a bit crunchy, probably because of the inmates) 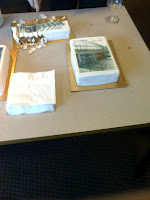 You see I'd somehow been persuaded to take up ballroom dancing in preperation for a formal ball that was that evening. Quite how I got myself into that I can't actually remember. My attempts to learn everything the night before I felt I wasn't very good at it - in fact I would describe my first lesson as traumatising, so my stomach was telling the rest of me it was a little scared for some reason.

However everything was moderately okay on the night, and it was a good excuse to try out one of my two newest acquisitons - the kilt outfit that arrived a few weeks back (the other one is a very cheap multiregion DVD recorder, I love ebay). About a month ago I realised since I spend nearly £40 each time I rent a kilt or other formal wear I should really just buy some. I somehow managed to score an entire outfit including shoes, sporran, sghian dhu etc. on ebay for £70, so I was bedecked in National Dress for this soiree (and only narrowly avoided punching some weird accented guy on the road to the Uni for saying I had a nice dress, or 'nice dreeesse' as he seemed to think it was pronounced).

Anyroads my technique needs a lot of work - say about 51 more weeks of lessons - but fortunately my partners were reasonably understanding. In fact Claudia and I seemed to find our little mistakes quite amusing and seemed to just stop for a good laugh at the fact I didn't have much of a clue. For some reason I can't fathom the band took it upon themselves to play the Gay Gordons, an old acquaintance from Scottish country dancing lessons at school and suddenly the situation was reversed and I knew what I was doing (or at least enough to appear that way). Unfortunately most other people didn't and a grand melee of folks crashing ensued. However I think this is a photo of me doing my funky stuff:- 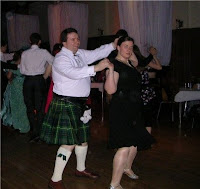 So, interesting times as I continue my whole renaissance man bit.
Posted by Stuart at 12:36 AM