When we last left I was on a sugar high from drinking several hot chocolates in rapid sensation.

For sheer variety I spent the afternoon of New Year's Eve in Lloyd's No. 1 with my brother and his new significant other. I drank a lot of hot chocolate as I was driving. Again.

In the evening Steve, Karen and I went to Jolly's, a dancey-type pub in Broughty Ferry. I inadvertently picked up a follower who seemed to insist on dancing into me in a not-so-suggestive way and at one point disturbed me by following me into the gents and provided plenty of amusement at my expense for my chums at the bells. This body is a curse, and this photo of Steve sums the experience up nicely... 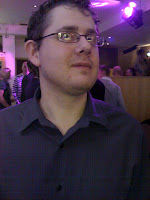 And of course I simply tried to look as philosophical as possible all night:- 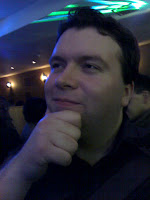 We went back to Steve's and thanks to his folks treated ourselves to the cinematic delights of "Sam" - a musical written back in days of yore and Monifieth High School by a commitee consisting of myself, Steve, the Mythical Man Hoppy and three of girls in our drama class. Actually implying myself or Steve had much say was probably going a bit far, and neither of us can write a tune to save our lives. One of the song-writing minstrels has gone on to success though, at least until the entire show hits YouTube soon.

This experience was probably most amusing for Karen however, as she'd never seen this video. We skipped the boring bits, so in fact we probably only watched about 10 minutes of video, even if it felt like two hours. After that an the New Year TV treat of Tales from the Crypt showed the BBC were once more pushing out all the stops for 2007.

When I finally got to bed I decided New Year's Day wasn't going to involve much action. I pretty much settled down to watch the new Sarah Jane Adventures, one of the billion spin-offs from Doctor Who. As Steve remarked it was just like Torchwood, but without the odd f-word. It was actually pretty good even if they had a bunk reason for writing out K9 (he's off closing a black-hole, could take years).

Other than that not a lot happened beyond mooching around, watching Pan's Labyrinth (an excellent Spanish film Six Foot Hobbit recommended I see) and the obligitary dinner at Ethiebeaton Farm that was my Xmas break. Then I returned to... 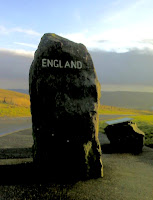 and I'm back in good old Leicester, still waiting on the bathroom, living room curtains and washing machine I reported on the 15th of December to be fixed. But that is as they say, another story...
Posted by Stuart at 1:11 AM