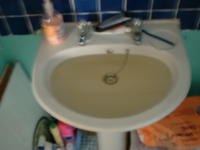 I've had a sizzling pig at Osla's, which by the way is the best place to eat. It's a pancake with cheese, bacon and maple syrup. Part of me died when I ate this artery hardening treat, part of me never left my usual seat in Osla's.

After this and dropping A. off at work I proceeded to Sumburgh lighthouse. A pair of dutch hikers looked at me oddly as I drove all the way up the hill, proving how lazy (and short of time) I was.

I also went to Jarlshof, a set of ruins covering 4,000 years of life near Sumburgh Airport. They had a pretty neat audio tour-guide. I also purchased copious amounts of alcohol to take back to the mainland. Oh, and most of the postcards I've sent should've turned up.

It's been fun, but I thought I'd end with a nice piccie of a sink full of Shetland water.
Posted by Stuart at 6:56 PM

It's all the peat up here y'know!