Gonna Need a Montage For All This! 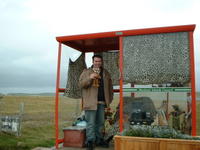 So I've been on the Shetlands a few days. It's been great - real calm and quiet. Agent Dale Cooper of Twin Peaks fame would describe it as a place "where yellow lights mean slow down instead of speed up". People outside of Lerwick don't need to lock their doors and a man trapped in the toilets is a big news day.

So far I've done the following:-

1) Been in a wind power generator while there's been actual wind.
2) Gone on 4 ferry rides.
3) Been to the northernmost point of the northermost island in the north. I've sent some postcards from the northern most UK post office. Let me know if you get one. If not someone else in your city probably has a postcard and is scratching their head in disbelief.
4) Driven L. and A.'s car - which was scary for everyone concerned. It's not the same as driving my car!
5) Eaten puffin poo*.
6) Discovered the above is very very nice actually.
7) Discovered the greatest restaurant ever, Osla's, who do meatball pizza. That's meatball with pizza. That's 2 meals for the price of 1! Grrreat!
8) Bought loads of Shetland beer.
9) Visited Scalloway castle. And been given the key for the castle. I even have a humorous movie of me opening my castle with my castle key.
10) Visited Scalloway museum.
11) Watched Team America and started quoting it incessantly (hence the title).
12) Remembered how to spell incessantly.
13) Taken far too many photos for my photo blog to upload in this sitting.
14) Discovered Shetland tap water is suspiciously yellow. I have a wonderful photograph of this to show later.
15) The picture er... pictured above is of Unst Bus Shelter, the most northerly bus shelter in the UK. And it has lots of cool facilities you don't find in an ordinary bus shelter. Mostly 'cos people would nick them, but not in the Shetlands.

* Puffin poo is made with coconut, white chocolate and sugar and stuff. It's not real puffin poo.
Posted by Stuart at 6:10 PM

Hey stu - could you bring me back a couple of bottles of Shetland ale if you've room in your suitcase? I'll give you the cash when I see you.

A Simmer Dim and a Sjolmet Stout would be good, or if you've had a go with the whole range, just pick your favourite and get me a bottle of that.

No bother if you forget or can't be arsed.

Oh, got your postcard today, complete with puffin postmark. Ta very much!

Great - because for the life of me I couldn't remember your addresses and didn't use any postcodes!

As for the beer, no probs, I already have loads to bring back. The only problem is every day I buy about 3-4 bottles of beer and by nightfall I need to go back the next day and buy 3-4 more as they've evaporated. Shetland beer is really, really volatile stuff I guess. :)