Mantic Games are a company with whom I've not had much dealings with, though I think I have some of their miniatures. It's yet another company run by ex-GW and aims to produce games at a reasonable price. A Warhammer-style career exit from Games Workshop Employee must be Disgruntled Ex-Employee with Own Company as Nottingham is littered with wargames companies managed by ex-GW staff like Mantic.

Their latest game, Dungeon Saga, is a co-operative dungeon basher where one or more players take the role of four heroes and play against the neccromancer. There are clear shades of Heroquest but it is much more tactical, taking into account facing and allowing the necromancer to animate or reanimate undead to engage your warband.

This was a game I played at the UK Games Expo, where this guy severely trounced us by taking out our wizard in a few turns, or ate our dwarf:-

Never one to be beaten I managed to acquire a kickstarter set - which comes in 2 impressive boxes shaped like tomes so they look neat on your bookshelf. The miniatures are a bunch of undead and the four stereotypical heroes - the barbarian, the dwarf, the elf and the wizard. There is a scenario booklet, a quick-start set of rules and everything is streamlined so you can just play on opening the box. There are 2 tutorial missions which deal with firstly learning how to handle melee with the barbarian and the dwarf, then the more tricky areas of magic and archery with the wizard and elf.

Overall a pretty slick pack. The miniatures are fine - nothing remarkable but they paint out well from the illustrations. If I had some criticisms it is that the monsters are solely undead in the core set, and that there are no gender versions of the archetypes. The elf is a gal, while the other 3 are male. Since my significant other is playing it is nice to be able to have girl alternatives for the other 3. I worry about these things, she doesn't. 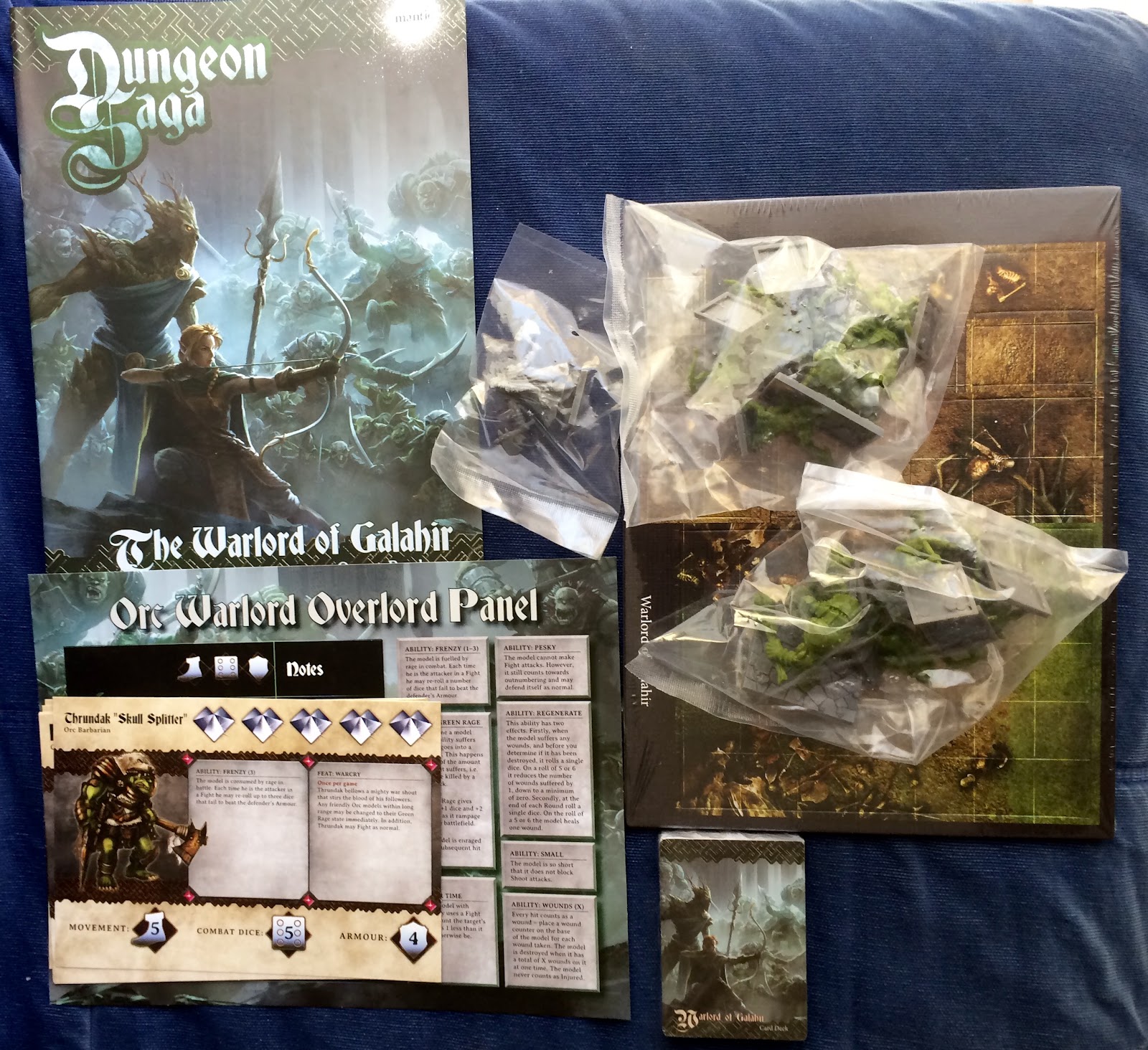 The Kickstarter also included various expansions - the Return of Valandor, which comes with more undead and two new miniatures (one of which is Valandor, the other is his arch-demon nemesis). I'm not sure what's so remarkable about this, other than it continues the story in the core set.

The next expansion, Warlord of Galahir, introduces the greenskins - orcs, goblins and trolls, with the heroes roster now including a female cleric and a tree-man druid with telepathy.

Then you've got your demons in Infernal Crypts, with abyssals/demons, and a massive green dragon features in the Tyrant of Haloi. Add in a halfling thoef, a paladinsylph demon huntres and you have your core heroes. So far so good but in part 2 we'll run into problems.