Review of Robin of Sherwood: Knights of the Apocalypse 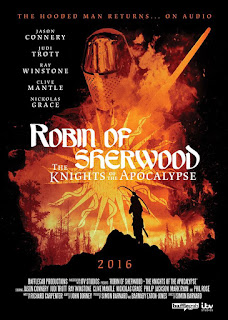 Robin of Sherwood ended with a 3rd season cliffhanger, as a ratings hit on ITV that had weathered changing its leading man from Michael Praed to Jason Connery. Sadly the funding for a 4th season fell through, and later ITV foolishly turned down the offer of a reunion TV movie which would have seen all the cast (including by then massive movie star Ray Winstone) come back.

That was that until 30 years later the remaining cast reunited for a Big Finish style 2 CD adventure based on the TV Movie script by the show's now-deceased creator, Richard Carpenter. Via an Indiegogo campaign that funded in 24 hours, the entire cast came back, namely Robert of Huntington (Connery), Marion, Little John, Will Scarlett (Winstone), Much, Tuck, Nazir (the now-not-so-silent Saracen assassin that led to numerous copycat characters in nearly every subsequent iteration), the Sheriff, Abbot Hugo and the Earl of Huntington. They even got Michael Praed back, though not as a ghostly echo of Robin of Loxley.

Sadly Robert Addie, the actor who played Gisburne, a major player in Robin of Sherwood, passed away and the replacement actor sounds nothing like his distinctive voice. On the other hand Herne is played by the original actor's son ably and Terry Molloy effortlessly replaces the recurring rat-obsessed prisoner from the series. Anthony Head plays the suave Grandmaster of the Knights of the Apocalypse, while Colin Baker hams it up as a seemingly horse-obsessed sorcerous knight who faces off against the Merries.

Knights of the Apocalypse deals with a particularly nasty sect of templars who indulge in the worst excesses the templars were accused of - worship of Baphomet, sorcery and favouring the material rather than spiritual. The audio has the feel of some of the more memorable and supernatural episodes of the series, in particular the Baron Belleme episodes, the Seven Swords of Wayland and the finale, Time of the Wolf, though the Knights plan is a little unclear and the Sheriff feels a little shoe-horned into the later plot (though I love Nickolas Grace's definitive sheriff).

Knights doesn't resolve the Season 3 cliffhanger (though does briefly mention what happened), nor does it really use any of the dangling Season 3 threads (such as Robert and Gisburne being half-brothers or dealing with the final fate of Robin Hood and his Merry Men). The Earl of Huntington's interactions with Robert even seem to ignore the fact they made peace in the Season 3 episode Rutterkin (though I suppose years have passed).

The audio is great - all of the characters sound great, and while they didn't get the rights to all of the original Clannad soundtrack Spiteful Puppet managed to get a Clannad-style soundtrack that compliments the original nicely. There are also lots of nice character moments. One recurring character buys it in a rather permanent fashion, but there is scope for a sequel (and hopefully an interquel that resolves the Season 3 cliffhangers). However there's a lot of actors to get together, and this was a for-charity audio. I do hope they do another one (and not resort to some sort of talking-book Companion Chronicle style release that many audio series descend into, like the revive Blake's 7).
Posted by Stuart at 9:51 PM