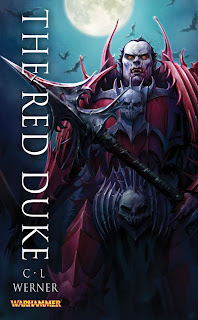 The Red Duke was a book I was in two minds about reading but I must say it is without a doubt the best book on Bretonnia I've read. It has dueling families, honour, moral dilemmas and interesting protagonists as well as a bat-guano crazy vampire as the main character who has none of your emo-semi-human vampire struggling to keep his humanity nonsense.

I refer to the titular Red Duke, a famed Bretonnian knight who returned from the crusades in Araby (subtle) as a vampire lord and laid waste to the Duchy of Aquitaine. He was eventually killed but his remains were interred and he regenerated but found himself entombed. This drove him quite mad and the author gets quite a lot of mileage by having the vampire flash back to various parts of his past.

There is actually a lot of potential information for WFRP Bretonnian campaigns (the Duke is mentioned in the vampire sourcebook Night's Dark Masters, though gets little mention in the Bretonnia sourcebook). The storyline is vased off the WFB "Circle of Blood" battle campaign which placed Bretonnian player against a Vampire player. It does lend credence to the old adage that WFB is the propaganda of the Old World, as while the story does follow Circle of Blood's outline to a certain extent it is not afraid to deviate from it. For instance the first part of the campaign is a battle in the village of Mercal between the undead and a rabble of peasants led by the Holy Knight, a respected knight of the realm. In the novel this still happens, but instead the Holy Knight is a failed questing knight who is now a templar of the death god Morr (Knights of Morr are something Werner seems to like, they crop up in his tales regularly) and his warnings to the arrogant nobility are ignored. This chap is get (the Warhammer term for siring a vampire, not a grammatical error) by the Red Duke and later becomes the titular Dark Knight who serves as his general later on in the story.

The 'shiny' Bretonnian honour system takes a bit of a bashing in this story. There are no heroic Grail Knights (except perhaps for the King Louis the Righteous of Bretonnia, the king during the Duke's first rampage). There is a significant amount of the novel devoted to Grail Prophetesses of a local landmark called the Tower of Wizardry (rules for which are on my webpage, plug plug). Knights of the Realm are content to quarrel amongst themselves. The three main knightly protagonists are divided by infighting and seem unable to unite to fight against this great evil, and it is this infighting that allows the Duke to escape his tomb. Even Louis the Righteous and his immediate vassals aren't quite as righteous as advertised!

One learns a lot about the Red Duke in this book, which is great considering he was a bit of a one-note villain in "Circle of Blood". There's little need for detailed motivations for villains in the battle game. We learn that he was the rightful Duke of Aquitaine and the king's brother, that he was get by one of the Old World's most powerful Blood Dragon vampires and that before he was turned he was such a frightening warrior he was named El Syf (in Araby literally the Sword). We learn of how certain parties tried to usurp him. It's all good stuff - the book does jump around from time period to time period though the thrust of the main narrative is the tale of "Circle of Blood".

There's some nags. It's too short in my view and I would love to have seen it carry on past the climactic battle. The nature of this story (having to leave the Duke alive) is that there is no real satisfying conclusion - though a sequel novel set in Warhammer's present could rectify this. I wouldn't hold your breath though, this is part of a series of one-off tales. The 'twist' conclusion to the main story regarding the Duke's bloodline came out of nowhere and left me utterly confused. Overall though well worth checking out, and some potential to be mined for a WFRP campaign in Aquitaine. Coincidentally one I've already discussed...
Posted by Stuart at 9:14 PM