Bretonnians at the Student Nationals 2012

So at the weekend I ran two sets of victims through my demented WFRP2E adventure. You can see what I am talking about at this micro-site. Maps, character sheets and the first 2 pages of the scenario are available.

This story was playtested by Naomi, Len, Josh, Fake-Charlie and Simon in Derby, who gave a lot of valuable feedback (mainly on tweaking the character sheets to avoid Death-By-Handouts and to be readable to a non-WFRP2E literate group of ne'er-do-wells). I did worry when we started around 3pm and finished around 2am, but we did faff quite a lot and my poor beloved Naomi got saddled with the female spellcaster with 6 pages of rules. The poor lass can still only count her RPG experiences on 2 hands. Coincidentally both tables at the con had exactly 1 girl and out of personal preference I preferred to give the girls the female character. I had a 2nd female character in case they wanted to play a fighty-type or we had more than 5 players, but Brunhilde the Norse Beserkeress was Lady Not-Appearing-in-this-Scenario both days.

The games themselves were a success. It was essentially a WFRP version of "The Quest for the Unholy Grail", chasing after a blasphemous Slaaneshi artifact that mimics and mocks the titular Grail of Bretonnia, with a white rabbit similar to the one-from-that-film. I've changed the scenario title about five times. It was set in Carcassone in Bretonnia, in an area called the Auveau Campagna. It was inspired by some of the Warhammer novels I've reviewed in earlier posts. Certainly the Knights of Bretonnia book and C.L. Werner's excellent Red Duke novel (read it on holiday, review forthcoming) were a big inspiration.

Some of the players on the second day commented that I'd made a lot of effort on the character sheets and character bios, though I think if your players pay over £100+ for accomodation, travel and convention fees they deserve a DM who didn't write the scenario on a beer-mat the night before. Both groups politely asked if they could keep their sheets and handouts, which was a nice compliment and I hope they like them.

Unlike in the playtest both days a character picked up an additional insanity. One the first day the Grail Witch picked up "Fire Bug" (i.e. pyromania) on encountering a ghost and failing a terror check. She roleplayed this reasonably well but sadly didn't burn down the inn the ghost was in.

On the second day brave Sir Tristan de Graal, Knight of the Grail, gained what was essentially depression on failing his terror check with the aforementioned ghost. Since he shortly afterwards learned from the ghost he would have to sacrifice his life to destroy the Unholy Grail it seemed kinda fitting he'd start to wish he was wrapped up in bed.

PC: "Why have you not done something about the ghost in your inn?"
Peasant: "Who am I going to call...Why did I just say that?"

While writing the scenario I thought it would be rubbish to have all 6-7 players playing knights in WFRP. Pendragon allows for diverse knights, but WFRP knights only differ in which munchkiny virtue talent they choose from Knights of the Grail. I then decided to add a herrimault (Robin Hood type peasant), but then make him outrageously over-the-top. Hence Caradas de Bergerac (Cyrano's little known cousin) was born. Probably he'll get retconned into de Berac to make it less obvious if I ever use that character again. 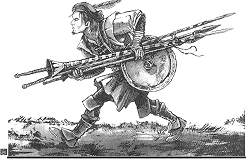 My favourite player was one who played Henchard, the Battle Pilgrim. Grail Pilgrims are basically weird groupies who follow Grail Knights around collecting discarded sundries to use as relics. This particular pilgrim was inspired by Baldrick in Blackadder: The Archbishop, and one player in particular relished wheeling and dealing in relics all the way through the scenario. As the only 'real' peasant in all 3 runs of the scenario I worried that this character might be a pain the arse to play as all the noble PCs had the license to torture him. This poor chap was reduced to riding on a donkey (the knight PCs suggested he be loaned a donkey, not a horse, even though the Duke of Carcassone was happy to lend him riding horse), but ultimately he wound up on the deal (as did the character in his other 2 incarnations). 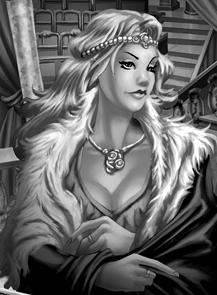 Perhaps the most troublesome character was the Grail Witch. For some reason I cannot fathom Knights of the Grail does not allow PC Grail Witches (claiming they're too game-breaky with their prophetic skills) and a lot of the other careers like knight, yeoman etc. are 'male-only unless you play a woman pretending to be a man' and suggests this practice is very widespread!

Anyway, I found some rules for Grail Damsels and collated them into 1 pretty document. Thus Guenere de Chanel, Prophetess of the Grail, was born. My take on the Grail Damsels is roughly inspired by some of the sorceresses you *ahem* encounter in the Witcher 2 (a great CRPG you should check out BTW). All 3 lasses playing this character made pretty good use of her arsenal of spells - including the awesome Doom of Dol on the 2nd day with a pretty epic intonation of "Sir Luc du Besson, you will slay Sir Lancet d'Ouest."

One thing I will say was, the brief for the convention was to write an "Action & Adventure" scenario, and WFRP2E is not exactly the first system you think of (7th Sea is IMHO, or possibly Feng-Shui). However knights, dragons, damsels, explosions, fires and mutants all made it pretty action packed, although it was very high-fantasy (most PCs were in their 3rd or 4th careers and in the 2nd day in particular were bricking it during combats against mutated 1st-2nd career dudes).

I might return to Bretonnia one day. I've the idea for a low-fantasy campaign called "The Ballad of Derrevin Libre" which mixes resource allocation, Edgar Allen Poe, Arthurian knights and the French Revolution. Suffice it to say the PCs will be hedgefolk, peasants and servants, not knights of the realm.

(Artwork on this post and the sheets was Google Imaged without permission).
Posted by Stuart at 3:50 PM