These books, published by Chaosium - the ones who brought you my favourite RPGs Call of Cthulhu and Pendragon - are a series of tie-in fiction for the Call of Cthulhu roleplaying game. I originally bought the Klarkash-Ton cycle and the Tsathoggua cycle as they seemed to be the only reasonably priced Clark Ashton mythos fiction collections on the market. The Tsathoggua Cycle had quite a lot of other authors writing about the frog-faced Old One and the standard veered from okay to pretty good. 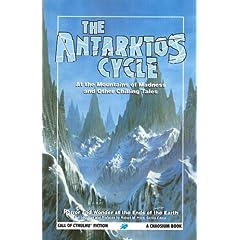 However reading the adverts in the back made me desperate to buy the the Antarktos Cycle, a rather weighty tome consisting of fiction relating to HP Lovecraft's novel At the Mountain of Madness.

The idea behind each of the Cycle books is that they show the evolution of a theme or character used in Lovecraft's fiction. They typically start with the precusors to Lovecraft (such as Machen, Poe or so on), reprint one or two stories by Lovecraft and move on to the better pastiches. Each story has a short introduction by the editor explaining its reason for inclusion (and giving the end away in one of them dammit!)

The Antarktos Cycle starts with stories such as Edgar Allen Poe's Narrative of Gordon Pym and The Thing From Another World (or rather Who Goes There?). Neither are Cthulhu stories but they are linked by a common theme of alien evil in the Antarctic. I was especially keen to devour The Thing and was surprised to find how close to the John Carpenter movie it was, even explaining more of the Thing's nature and psychic powers. 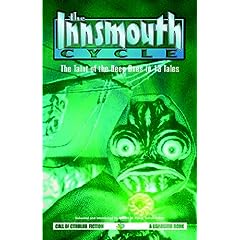 Over the course of my holiday in York I devoured the Innsmouth Cycle - which contains precursors to Shadows over Innsmouth like "The Harbour Master" by Robert W. Chambers and Fishhead. The Harbour Master is about a fishman menacing a small cove with unique wildlife while Fishhead is about a mutated fishlike fellow who is murdered by a group of hicks and gets revenge from beyond the grave. The later pastiches that follow Shadow over Innsmouth are pretty good. The Deep Ones was a bit 60s for me, while Live Bait was full of twists and turns.

Another good collection is the Hastur Cycle which reprints classic Chambers stories like The Yellow Sign and the barmy Repairer of Reputations as well as a rather freaky story called The River of Night's Dreaming. 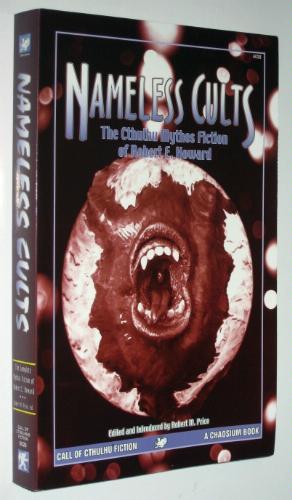 Sadly it seems to be a bit of a trek to track down these books. I assume they had limited print runs but there are quite a few I fancy. Bizarrely the Cthulhu Cycle is near-impossible to find for less than £60, as is the Ithaqua Cycle, the Book of Eibon (the third Clark Ashton collection, though to be fair it only has 2 of his stories in it), the Mysteries of the Worm, the Sub-Niggurath Cycle, the Azathoth Cycle, Robert E. Howard's Nameless Cults and other collections. There is over 20 titles here - yet only about 5-10 seem to be readily available.

There are also some "new" collections from Chaosium like Frontier Cthulhu, High Seas Cthulhu and so on. However I suspect these will not be quite so good - besides I really want a copy of the older material first!
Posted by Stuart at 8:25 PM