Reading the works of Robert Howard and HP Lovecraft has reawoken my mythos obsession to such an extent that lately I have come to the realisation that there is an extensive amount of Cthulhu mythos stories not penned by the gentlemen of Providence himself. As a learned fellow with a thirst for knowledge I have been dipping in and out of collections of these works for a while. Conan stories on their own can be repetitive. 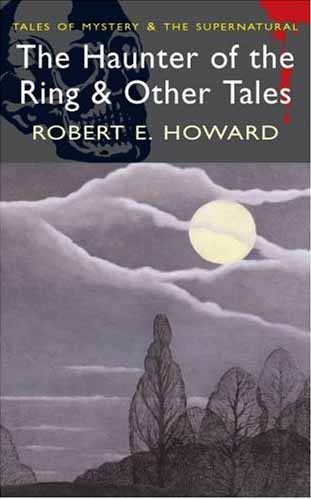 Firstly I obtained a Wordsowrth edition of Robert E. Howard's horror stories. Many of the stories therein are part of Howard's contribution to the Cthulhu mythos. However Howard differs from Lovecraft in that his hardbitten main characters do not go insane
but rather tend to go beserk and rip the tentacles of the evil critters to pieces. Also a lot of these heroes seemed to be named Steve for some reason. Another recurring trend, which I must confess I was getting a tiny bit tired of, was that in a REH horror story the hero bangs his head and remembers a previous life experience, such as becoming a raider named 'Conan of the Reavers', that relates to the
catacombs he is exploring, or the cairn he is excavating. Thoth-Amon, a villain from Conan, is mentioned in a few of REH's stories. Thankfully the reincarnation stories have varied resolutions and one of them, "The Cairn on the Headland" is excellent in its use of Norse mythology.

Howard has also written more conventional horror stories featuring Hitchcock-like bird (""Pigeons from Hell"), vampires ("The Horror from the Mound") and Werewolves ("In the Forest of Villefere" "Wolfshead"). Annoyingly the book points out that Villefere and Wolfshead are part of a trilogy of stories Howard wrote. The third story, aptly named Wolfdung, is not included - why is never quite explained. I suspect Wordsworth editions only republish work that is now in the public domain and I believe Wolfdung is not in the public domain.

Overall any of Howard's horror work is well worth a read. Just do not read three 'bump, oh I was a Viking raider in a past life and now know that Ianto Davies is descended from my hated enemies the Welsh and must now I must murder my friend" in one go.
Posted by Stuart at 5:35 PM