Made it back to Leicester this afternoon (5pm no less) after leaving Dundee around 10am. I suspect it had something to do with the 95 mph stints I kept accidentally doing.

Spent the evening chilling and playing Ultima V: Lazarus, which is an amazing game using the Dungeon Siege engine. It's even more amazing given the fact that I am listed in the game credits under past contributors. I wrote some dialogue in 2001 though it's highly unlikely it was used. However I do appear twice in the development quotes (everything I say being highly quotable of course).

Anyway expect many sad updates as I progress through this, but let me show you the uncanny likeness of my character... 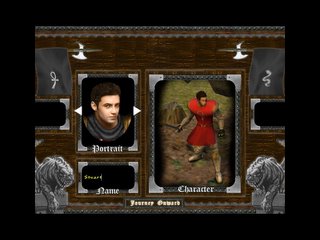 Well played Stu - that's impressive getting your name in the credits!

I never got my name in the credits of Pacman yet they made full use of dialogue I wrote for the character. If anyone ever gets through to stage 14, 1 minutes and 34 seconds into that level, the 'wakka wakka wakka wakka' was suggested by me!