A Discussion of Doctors

Every day I get literally thousands of emails asking me who my favourite doctor is. Sadly due to the fact that I am far too busy riding a flying pig to work I am unable to answer them. (Some of this may be a lie). Probably my favourite Doctor is Paul McGann, or if you want someone who actually got some screentime Tom Baker. Eccleston was probably the best nu-Who Doctor, but with the most dodgy scripts. Smith on the other hand is excellent but is served by some really good scripts. 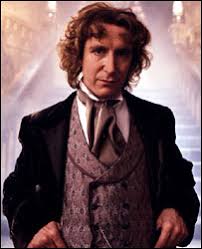 1. Paul McGann. The Doctor who never was, I remember considering his outing decidedly watchable compared to much of the 80s Doctor Who panto that I'd lost interest in as a kid. It's a tragedy he never got a series as he had an amazing costume (and it is unbelievable he just found it lying around), was an excellent actor (with much more range than say Tennant) and the more modern sensibilities of the current Doctors with a posh veneer resorting to the blatant common-denominator-pop-culture-remarking of Tennant or (less so) Eccleston and Smith.

McGann has had a pretty good run on audios. His radio plays are the Rolls Royce of the Big Finish range and his only rival in terms of output is Colin Baker. However with the coming of Tom Baker to Big Finish I can't help but feel he is being slightly sidelined with only 3 audios and a boxed set this year.

Sure the TV Movie isn't brilliant, but it is miles better than Time and the Rani, The Twin Dilemma, and is at least comparable with Robot and Castrovalva in terms of quality. Also bear in mind it's a pilot, and try judging Star Trek The Next Generation, Babylon 5 or numerous other US shows solely on their pilot. It is basically a clip show of things to excite the attention-deficit Fox Network executives (see we can do car chases, see we can do medical drama, see we can do fighting) as opposed to dropping the Doctor in a well-defined universe like say, Firefly.

2. Tom Baker. My favourite classic Doctor, this chap was the first doctor to really make the show fun. City of Death (and indeed all of that season) and the Pirate Planet are both firm favourites of mine. The later episodes of his era are more representative of the more serious Peter Davison stories, but pre-JNT his doctor is a lot of fun. I also like his gothic era, with stories like the Brain of Morbius, the Pyramids of Mars and Seeds of Death.

It's worth noting his audios with BBC are hit and miss and sadly not designed to be devoured piece-meal. He is in the middle of making a gazillion CDs with Big Finish suddenly and they're bleeding brilliant.

3. Eccleston. I was a fan of Eccleston before the series began. I loved Shallow Grave, Cracker, 28 Days Later and even Elizabeth. He played a very dark, damaged and emotional doctor - when he was happy you really felt it was genuine, and yet he managed to be angry or dark without seeming over the top. His relationship with Rose was much more interesting and believable than Tennant's creepy obsessive behaviour. It's a real tragedy he left the show so early, especially as later seasons gave the Doctor more to do, and that he seems so distant from the show. Mind you the people at the top seemed to be on a bit of an ego-trip so perhaps he was smart to leave.

4. Matt Smith. I really like Matt Smith and overall the Smith-Moffat era has been the most even-quality era of the new show. Sure you still get some stinkers like Victory of the Daleks but I can tune in to the Xmas special or the season finale with a reasonable certainty it will have a solid cohesive plot. The show is also more sci-fi than soap opera and the companions seem a bit more rounded.

As an actor Matt Smith does occassionally seem to be playing the same kind of character as Tennant, but there are much darker moments and overall the writing is much more subtle, allowing the acting to seem a little more palatable.

5. Sylvester McCoy. McCoy was the doctor I watched as a kid and was Scottish which automatically makes him awesome. Even more awesome is that he's allowed to sound Scottish, rather than like Mr. Bean.

He had some real clunkers (notably when Mel was still on the show), but some of his later episodes actually hold up really well. Rememberance of the Daleks is good, the Curse of Fenric actually makes sense if you watch the director's cut, and Survival is actually close to the new series in that it hangs around a chav-infested council estate. If he'd dressed how he appeared in the McGann movie it would have been a substantial improvement to the silly question marks.

In terms of audios, McCoy actually performs really well. I'm not so sure about poor Sophie Aldred, but some of his later audios with Hex form a cohesive season that takes place after his last episodes and before the McGann movie.

6. Jon Pertwee. The elder statesman of Doctor Who it's a real shame he didn't live to take part in Big Finish. This was the first Doctor to really become the action hero that we now see in the later doctors. Excellently portrayed - though perhaps to authoratitive for my tastes.

7. David Tennant. Only appearing in the second half of my list but doubtless at the top of every fangirl's this is because while Tennant's a pretty good actor unfortunately some of the writing is incredibly wonky and can make him and other characters totally unlikable at times, though certainly not to Torchwood Season 1 levels of unlikability.

I really didn't like his first season as I felt the episodes were written for Eccleston, who I hope would've toned everything down. The relationship he had with Rose was nauseating at best, and disturbing at worst. For example here's a rough synopsis of The Idiot's Lantern:-

Doctor (gurning): "Wow, people are losing their faces. This is fun and interesting."
Rose (gurning): "I'm awesome, so I am going to threaten this old man with my awesomeness."
Old man is working for the face-eating bad guy. Rose loses her face.
Doctor: "Now I'm upset enough to actually investigate this episode. How dare someone ever do something bad to Rose Tyler!"

Tennant's second season is much better, despite nearly episode referencing Rose's departure and starting with Donna Noble on full comedy sidekick duty. Human Nature and Blink are seminal episodes, followed by Utopia. It was also a RTD-lite season (though he alleges he secretly rewrote most of the good bits). Sadly after that it falls into the kitchen-sink finales to disguise the fact RTD has no plot left in him, as the Doctor gets an army of sidekicks led by Captain Jack.

Tangent: Authors sometimes sign their work by the naming of their characters. For instance Jeffrey Sinclair/John Sheridan, along with the Michael in Michael Garabaldi gives you JMS in Babylon 5. Rose Tyler Doctor gives you RTD. No wonder he never shut up about her!

8. Patrick Troughton. I really think I'd like this doctor if there was more material available. He does seem somewhat underwritten as a character. I like the banter between him and Jamie, possibly the last decent male companion the show ever had.

9. William Hartnell. If Hartnell was bad it would have been the end of the show. However his portrayal is jarringly different from where the character now evolved to.

10. Peter Davison. Peter's appearance so low on this list doesn't mean I consider him rubbish (unlike #11 on this list) but rather he never made much of an impression on me. As an aside his characterization in Time Crash is quite different (read: a clone of 10, complete with planet-sized ego evidenced by him assuming, "You're a fan!"). He's quite a long way from the quiet intellectual doctor in the episodes I've seen. His stories tended to be quite dry, subdued and almost hard sci-fi, with concepts like hydrogen inrush, a recursive universe and so forth. Apparently Colin got the gig by guest-starring in an episode of Peter Davison's final season, hamming it up and being invited to a member of the production team's wedding where he impressed the producer with his jovial behaviour. I think it really shows the lack of regard that Doctor Who had at that time that an actor could walk into the role by going to the same party as the producer. I cannot imagine Smith, Tennant or Eccleston getting the job purely by dint of being the karaoke whizz down the pub with the producer.

Sadly this leads me to believe Baker really lucked into a job that normally would be beyond his acting chops. He's not a bad actor but I don't think he's a leading man, rather someone who should play a loud bombastic guest role when Brian Blessed is too expensive. It is rather telling that his career post-Who has been non-existent in terms of leading roles and he is a firm fixture on the convention circuit (I think I narrowly avoided him at the Leicester Space Centre once).

It's true Baker didn't have much of a chance - his era was marred with uniformly awful scripts, the worst costume imaginable chosen by a man who thought the hawaiian shirt was the height of elegance, a writing staff who decided that having the Doctor behave like an unlikable coward/maniac at the drop of a hat and the worst companion imaginable (Mel). However I think a better actor could have weathered 3-4 seasons and lifted the show from the turgid mess it had become. Tom Baker made even the most boring story watchable. Colin Baker's obonxious doctor gives you another reason to turn off.

His audios are often very good but they feel like an apology from the man performed and written with years of hindsight. It does seem there is also an awful lot of them - again not surprising given how much free time as an actor he has. He's guest started as Maxil and the Sixth Doctor in spin-offs Gallifrey, Jago & Litefoot (and dear lor' do I think they've overdone it by having him and Leela in it) and also appears in Big Finish's Dark Shadows and Sapphire and Steel. I assume he's cheap to bring in.

Ultimately, I don't follow the apologists who make excuses for Colin's short era. He wasn't a good actor. It also wasn't a good era. I remember my housemate and I sitting through episodes from the Twin Dilemma to the Trial of a Time Lord yelling for someone to shoot him so he could regenerate into a better actor.
Posted by Stuart at 8:16 PM