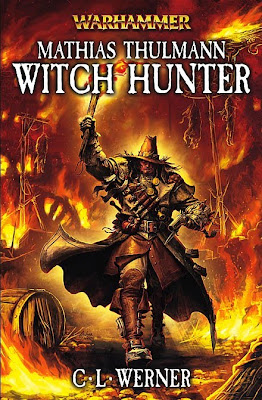 Fresh after finishing Marks of Chaos, as part of my inevitable putting off of reading a Feast for Crows I read the Warhammer: Matthias Thumlann, Witch Hunter trilogy...

Way back in the dawn of time when I bought my Warhammer Fantasy Roleplay 2nd Edition book I was offered the first part for free. As it was the most WFRP-like novel on offer as part of this deal I accepted.

Matthias Thulmann could be taken out of the Witch Finder General movie with Vincent Price. His description certainly matches that of Price's Matthew Hopkins, and his often cruel mercenary sidekick Streng is a Warhammer version of Hopkin's sidekick Stearne. Werner, the author, is a big Robert E. Howard fan and in many ways he is also emulating Solomon Kane, a zealous Christian puritan swordsman hero, with his Thulmann stories. He has another character, Brunner, who sounds an awful lot like Robert E. Howard's Conan during his mercenary era.

The omnibus book has three short stories. The first of these is a run in with Chaos cultists that sets the scene nicely, the second is a medieval zombie survival horror story and the third is a witch hunt that links to the start of the first book. It seems a bit cheeky to make the last story interconnect with the first book - I read the book first and was confused by references to a seemingly non-existant set of adventures. This is how the character was first introduced and a continuity-freak like myself should not really complain.

The main story in the three volumes concerns Thulmann's search for an evil scientist (though the trail only picks up in Book 2) and various shennanigans pertaining to a sorcerer's spellbook. The book was stolen from a vampire and used by witch hunters for their own interesting purposes, but now a whole host of characters want the book back. One character, a villianous necromancer, is always in the background throughout the trilogy, but is never seen by the heroes.

Books 2 and 3 concern the book falling into the hands of the scientist and his skaven buddies. The skaven are written fairly menacingly, though I often feel they are overused in Warhammer. (Mind you this probably stems from when I started roleplaying with Advanced Heroquest. Skaven were the only monster you got in the box). I'd love to see a story or even a Warhammer adventure with fimir behind the nefarious goings on.

My problem with the continuance of the "get the book" arc throughout the novels is it starts to feel a bit old. Enemies are seemingly killed and come back with worrying regularity. At times it feels like watching a season of "Whacky Races" or "Stop the Pigeon". With Carrandini the Necromancer in the role of Dick Dastardly, usually ending the episode driving off a cliff and his car exploding yet emerging next week unscathed. Book 2 in particular does not stand on its own as a read - the ending is abrupt and a sizable amount of the third book is spent rounding off the second book and getting our heroes out of Wurtbad.

I would like to have seen Thulmann investigate a few new cases, perhaps some Chaos cultists in Altdorf or Marienburg. There is actually quite a lot of backstory of old cases hinted at in the story for Thulmann that I think would make for an interesting collection of short stories - and certainly more interesting than some parts of Book 2, which really dragged in places and yet also felt too short.

My favourite book is definitely the first one, though the third one picks up once our heroes leave Wurtbad, the setting of the 2nd novel. In Book 1 and the short stories our main characters are quite dark anti-heroes - Streng is an expert in torture and seems to enjoy his trade, Thulmann is happy to threaten his innkeeper to ensure he gets the best room in the tavern and the best food. He gets little help from the local lord, an ex-witch hunter, and there are conspiracies with conspiracies, including a nice little twist I didn't see coming.

In the second and third books the two main characters become more 'good'. Thulmann's high-handed and haughty manner to peasantry is explained (or dare I say retconned) as being an act - a necessary evil, as a witch hunter must be feared by the populace in order for him to function properly. Even Streng has some redeeming moments as he shows he might actually care about his employer and goes beyond what I would consider reasonable for a hired thug. Personally I was happy for the characters to stay very grey. They still do questionable acts, but compared to their peers it is pretty clear they are saints who go by the book.

This comes across a bit odd in the third book when they are teamed up with more zealous and self-interested members of the Church of Sigmar. There is the inevitable clash between the zealots and a group of peasants hiding a mutant child. Thulmann intercedes on the mutant's behalf, trying to stop the zealots from having a good old burning (almost a 180 from how I felt the character was initially portrayed) by saying they have more important things to do. Then later on in the book the villagers are revealed to be in league with the bad guys... making the zealots right in hindsight to want to burn the mutant. I personally thought that was a bit odd - but that's life I suppose. If they zealots have already gone to the bother of arranging a lynching why not just go through with it? (Mutants in Warhammer are a brilliant storytelling mechanism as ultimately there is something sympathetic about someone shunned in society through no real fault of their own).

As to the church there is some interesting politicking in the Church of Sigmar. Events from Marks of Chaos get a mention, as Gamow, the Lord Protector of the Templars of Sigmar (i.e. the head witch hunter) died in suspicious circumstances during the events of that novel. In this trilogy we learn that the Grand Theogonist Volkmar has decided to replace him with three new Witch Finder Generals, rather than give one man all the power. However the third book has Volkmar replaced as Grand Theogonist by Johann Esmer and Lord Bede about to be is installed as his Lord Protector. Apparently in the Warhammer Fantasy Roleplay books when Volkmar returns from the Storm of Chaos he brings back the three Witch Finder generals! Confusing!

The Grand Theogonist thread is part of the Storm of Chaos metaplot, and a bit jarring in this book as it doesn't really lead anywhere. This is probably the downside of a shared universe where the Storm of Chaos was intended to be a massive crossover event that affected even the novels. The new Lord Protector is to make the stories consistent with Marks of Chaos. The author goes to some pains - even Sister Karin from Marks of Chaos gets a brief mention in the third book, so extra marks for that.

Silja Markoff, a character introduced in the second book, is not a character I am keen on as she becomes the mascot for the "softening" our protagonists in the later books. She seems to be the quintessential 'generic adventurer' who is employed as an agent for her father, the Lord Justice of Wurtbad. This is a job that seems to leave her completely free of responsibilities (especially given what happens to Wurtbad in Books 2 & 3) and able to up sticks and follow our hero. She serves as the romantic interest, something that I find somewhat jarring when our main character should be a cold religious zealot. However if Werner kills her off in later books I'll give him a free pass on this - that would be an interesting twist and could send the character to a really dark place.

It's also worth noting the story ends on a cliffhanger after 3 books. The last book was published in 2007 and the author does plan to return to the series but says that we should not expect anything new for Thulmann imminently.

Overall it might seem I'm being critical of these books but they are a decent read. I hope to see more Thulmann.
Posted by Stuart at 12:10 AM