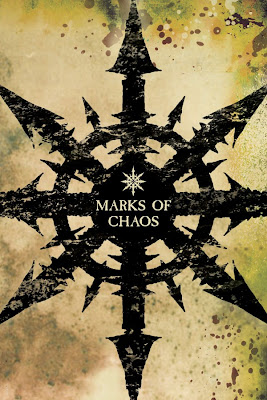 Marks of Chaos is a print-on-demand book available from the Black Library. It's also the first Warhammer novel I bought online. It comprises of two novels, Mark of Heresy and Mark of Damnation, as well as two short stories, No Rest for the Wicked and A Night Too Long.

The sole reason for me buying this is because I have long admired the author, James Wallis, for his work in the games industry. I was a big fan of his old company's (Hogshead Publishing) output for Warhammer Fantasy Roleplay as well as some of the other games he put out.

The man can write innovative games, such as The Extraordinary Adventures of Baron Munchausen - a game I can boast I have the Gentleman's Version (not the commoner's Wives and Servant's Edition). Sadly not all of his projects panned out - in the twilight times of Hogshead he was going to rewrite the original ending to the award winning Enemy Within campaign until a hard disc crash destroyed his draft and probably his will to start all over again (if only Dropbox was invented 15 years ago).

I have the original ending of Enemy Within - Empire in Flames and on paper it is a relatively good scenario. It's even got a fantastic mcguffin that I think players will enjoy, a fairly epic climax and epilogue that would satisfy any player characters that has slogged through the entire Enemy Within Campaign (and trust I only got as far as finishing running Shadows over Bogenhafen with some players who all-but-mutinied against the dark, dark plot.

Wallis stated his Empire in Chaos would be even better, and given Marks of Chaos I am willing to bet it would have been a really memorable climax. I'd also be glad I was the one sat behind the screen rather than playing as his novel puts the protagonist through the ringer and then some.

The story concerns Karl Hoche, a loyal lieutenant in the Imperial Army. Now at the start this sounds like bog-standard Warhammer but Karl very quickly finds some things are amiss in his unit and is unceremoniously parcelled off to Altdorf to report his findings to the regiment heads. It all goes south and Hoche ends up joining a secret branch of the Reiksguard called the Untersuchung (German for Analyse), a spy organisation that hunts Chaos within the Empire. It is the only way to stay safe from the regiment that want him dead to preserve their honour.

From this point on the novel shifts from the archetypical Warhammer fighty-fighty teen prose to a fairly tense spy-novel full of intrigue and nastiness. Hoche gets trained up in espionage and infiltration but realises pretty quickly that various factions within the Imperial forces are engaged in petty politicking against one another. For example the Witch Hunters view the Untersuchung as heretics. The Untersuchung view the Witch Hunters as unsubtle plods who would rather burn old ladies than do the legwork. Then there's the fact the Untersuchung is only part of the Imperial guard as a technicality, and that both they and the Witch Hunters have also been infiltrated by a group known as the Cloaked Brothers. This is a shadowy faction of ex-witch hunters content to observe Chaos and eventually defeat it by using that knowledge. So content they do not try to stop their plans.

This is also the same Warhammer as the Enemy Within campaign, so that means the upper echelons of Imperial society is compromised by Chaos cultists. The Powers that Be are just more likely to hinder or even actively kill our hero than help - either because they are cultists or because they are duped by their superiors who are cultists.

Plenty of cults abound in the book. The Purple Hand, a deep-cover cult and one of the main villains of the Enemy Within, make an appearance. So does the Ancient Order of Illuminated Readers in Marienburg, explaining what happened to them after James Wallis's (and plenty of other authors) own Marienburg-based Dying of the Light scenario. This was an order of readers who literally pulled their own tongues out to prove they would reveal the cult's secret lore, and since the Dying of the Light they have gone even further downhill into wickedness. There is also a new Khorne cult - the unsubtle Blood Chaos God - who Wallis nicely weaves into the narrative.

As I said this feels more like a spy novel than a wargame novel (not say there isn't a few scraps along the way). The closest I can think of his that Hoche is akin to 24's Jack Bauer, at least in the first season when Baeur was a human being and not an invincible action movie character. He's permanently relying on his wits first and is being hounded by both the supposed-good guys and the bad guys.

About 1/3 of the way through the book the plot kicks in. The Untersuchung is disbanded for heresy (a point some readers regret, although Hoche's mentor is never explicitly seen dead). Due to a botched mission and torture by a highly placed Chaos cultist he is left with a mutation and delivered to the Witch Hunters to be tortured. It is never quite clear how he gets the mutation, it seems to be a combination of tainted meat and a cultist's knife.

This is a point where the book really excels. In other Warhammer novels mutation is used as a McGuffin to give the hero superpowers like some sort of X-Man. Here it is shown in all its horrors - the gradual loss of humanity, the disfiguring of both the soul and the body. Hoche's mutation is rarely a blessing, but often a curse. Over the course of the novels Hoche's physical corruption manifests in more and more overt ways while he tries to stay mentally pure and set himself the task of destroying as much Chaos as he can before he inevitably succumbs to its lure. There is no possibility of redemption, no reprieve and no magic McGuffin that will save him. Only damnation waits, and living each day to fight Chaos is a victory in itself.

The conclusion of the book sees Hoche eventually track down the true followers of Chaos and thwarts their plans, leaving himself branded a mutant and a traitor (which in the roleplaying game is usually a sign you did the scenario successfully). There are sufficient followers of Chaos in the Imperial faction to ensure he is blamed for their botched plan and he leaves alone to hunt down Chaos wherever he finds it.

The second book revolves around the Storm of Chaos event, a big metaplot for the Warhammer tabletop wargame. Sigmar is reborn as a man and the forces of good must find him before the Chaos cults do. These good guys have formed a holy crusade, led by a Sigmarite priest called Luthor Huss, and have been denounced by their church's authorities as heretics. Hoche falls in with the renegades as they search for Sigmar, all the while being unable to show his true nature to anyone. He ends up as a leader of the Crusade and is instrumental as a background player in location the reincarnated god and getting him past the Chaos cultists who have insinuated themselves in the Imperial court to the Emperor.

After an amusing and bloody scene with an enemy Imperial steam tank Hoche is left alone by Huss and Valten, the reincarnated Sigmar, on the gates of the Imperial Palace. He has walked into the stronghold of his enemies and must face the Witch Hunters the Chaos cultists have sent after him.

The book ends with Hoche triumphant however. He thwarts their efforts to kill him again, even proving to some of the good guys that he is truly a good man still in a strange world where the leaders of Order are actually the servants of Chaos, and a mutant is the hero.

It's a relatively deep and horrifying pair of books, following Hoche's descent and struggle for humanity. Other characters join him but ultimately Hoche is alone. This does lead to some excellent set-pieces, whether its interrogating a witch hunter on the privy at crossbow point or commandeering a steam tank to get Sigmar Incarnate through the compromised Imperial forces.

Sadly the "Wallis Unfinished Series Curse" hit again as it did Empire in Chaos. It’s a testament that the books are called "The Chaos Hunter" series but it is only mid-way through the second book Hoche earns that epithet. The author was unable to commit to writing more books in the series, originally planning 4 books but life forced him to leave it at two. The third and fourth books would have seen Hoche sacrifice his life nobly to remove the cancerous cultists at the heart of the Empire in the town of Middenheim, only to be succeeded by one of his followers as the Chaos Hunter. (Snark: Which is better than him sticking around for 12+ novels with a death wish and becoming superhuman, unlike some other Warhammer books).

Given the retconning of the Storm of Chaos (current Warhammer Fantasy Battle presents it as only one possible future for the Warhammer world) I am uncertain as to whether Hoche's tale will ever continue in any form, though without Wallis perhaps that is just and fair. A different author might lose the feel of the novels.

Overall this is an excellent buy. The two short stories are more of a buddy-cop show involving two Palisade members (seemingly Secret Service operatives) investigating shenanigans in Altdorf. Fun stuff, but the novels are the real highlight of this omnibus and can be gotten in 2nd hand bins still.

The only criticisms I have is that sometimes the plot is a bit too smart, sometimes characters (including the hero) can be a bit stupid or razor sharp - but this reflects how I find myself sometimes. There is a little cliché, such as the rabidly fanatical witch hunters who are either corrupt or cannot find corruption when it stares them in the face but are willing to hound the innocent. Thankfully there is a counter-example to this in the second book, but here the witch hunters don't come off well.

C.L. Werner, whose excellent Warhammer Witch Hunter books I will discuss another day once argued the Cloaked Brothers in particular seem unnecessary and somewhat tacked-on. It's worth noting that Wallis admits he was building up to doing something conclusive with them that would have been seen in books 3 and 4. I would argue they drive the entire plot in the first book and are a mirror to Hoche in some ways - people who see Chaos everywhere in its wickedness yet coldly do nothing, while Hoche becomes a folk hero for attacking Chaos wherever he finds it without thought for self-preservation. Which is because the man has nothing to lose in dying.
Posted by Stuart at 6:39 PM