So, new Red Dwarf in less than a month's time. Not bad since it's been nearly 10 years since the last episode ended on yet another cliffhanger. Given the delay between Red Dwarf VI and VII due to rape trials and so forth I was always surprised Red Dwarf VIII ended on a cliffhanger. This cliffhanger was of course like the last one resolved in a deleted scene which could easily be tagged on to explain it. In case you have no idea what I'm gibbering about here's the cliffhanger and deleted scene...

Not sold on the need to resurrect Red Dwarf. I personally liked Red Dward VII (Stoke Me A Clipper was my favourite ever episode of RD) but when I hear about things like :-


I don't exactly overflow with confidence. Add to the fact the cast look ancient, as evidence by the following:- 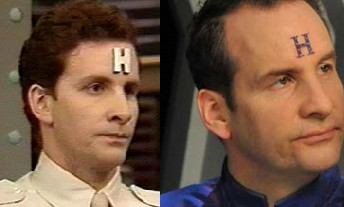