A Study in Emerald

Watching TV's been difficult for a while, so I've been listening to a lot of audio drama. I listened recently to a Neil Gaiman short story called "A Study In Emerald". It's part of an anthology of HP Lovecraft meets Sherlock Holmes stories called "Shadows over Baker Street", a book I intend on buying at some point when I start earning money for unnecessary things like books, food and petrol.

Anyroads Neil Gaman made the short story available on his website here. It parallels the original Sherlock Holmes story, A Study in Scarlet, where Holmes meets Watson. Obviously Study in Emerald is somewhat different, but if you don't understand it (and you need to be up on your Holmes-mythos more than your Cthulhu) the Wikipedia page explains everything here.

By the way, does anyone think Neil Gaiman looks like David Schwimmer (Ross from Friends). I just don't see it, but my esteemed colleague, Dr. Steve thinks otherwise... you decide... 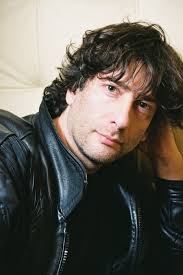 Yeah man, they look pretty much identical. Surprised you can't see it.

Stuart - you must be blind if you can't see the similarities.

Wow - your chum Steve really has a good eye for spotting obvious likenesses. He sounds like a fab guy.

Ross from Friends is Neil Gaiman - I totally see it now! Yay for steve!

Can't believe you can't see how eerily similar they look. I am on the side of your friend Steve on this one.

Well I was just passing by this blog and noticed the pictures of Gaiman and Schwimmer and feel compelled to agree with your mate Steve - they certainly do look alike. Anyone who would say there was no likeness is palpably wrong.

Hooray for steve. I think you should give him £5.