The Ordeal of the Three Meals

So, three meals out in a row it was, proving Xmas is just round the corner. Wednesday was spent in the familiar haunt of the Old Horse, eating blue burgers (which I recommend to anyone new to Leicester, either at the Old Horse or at the Blue Point on Evington) and deciding to have a leaving do the next night at the Chinese.

The restaurant on Thursday seemed to be in a takeout place on Highfields Street. We were upstairs in this particular restaraunt, in a room for large parties and visiting Chinese wanting privacy. I even drank Chinese tea, which for those of you who know me well is a remarkable thing in itself. However I didn't just drink tea - there was the particularly tasty Tsingtao beer in plentiful amounts.

However the meal was relatively messy (at least for me) and it seems I really really must learn to use chopsticks. I'm not the most coordinated of fellow's but I plan on learning.

Friday night's meal was a veritable banquet at Poppadom's, though I must confess due to having been drinking straight after work in Babelas (nice pub BTW) I really drank more than I ate, particularly the deadly Cobra beer that I'd be introduced to on a previous expedition to Manchester a few year's back. 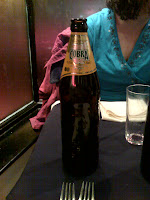 I seem to have -far- too many photos of the evening, including a choice one of me I must upload at some point. Suffice it to say what followed on Saturday morning was not good - no baths were harmed, mainly because I haven't got one, nor where there any traumatised rabbits, but also I didn't manage to write the talk I'd planned to and there was the Catch-22 of feeling too miserable to go out but also not having much food in the house, except cereal, since I'd eaten out every evening since Friday. In fact if Claudia hadn't come round I expect I'd still be sat on my couch just now thinking about going to Morrison's. However, despite what certain parties say, after a pizza and some of Claudia's most excellent strudel I was my usual chirpy self.

I am looking forward to a week of eating in and not drinking. Unless anyone knows of a place that sells Cobra or Tsingtao beer wholesale.
Posted by Stuart at 7:04 PM

Hmm. don't know what surprised me more: 1) you've reached the ripe age of 26 but can't use chopsticks 2) you drank a non-carbonated beverage or 3) you went to a curry place. Having known you and your dicky tum for 9 years, I suspect it's number 3.

Think your mum will be pleased on a number of counts though :) sending you an email about Crimbo eve, btw.

You're becoming quite the sophisticated Renaissance Man Stu - you've abandoned your bland old diet and progressed to such culinary rarities as curry and a cuppa. Good fellow!

Now that you're on a role, extend your newly-refined palate further by experimenting with other gastronomic curiosities like Pot Noodles and Creamola Foam. Maybe even Cheezy Wotsits if you're feeling brave.

I kid. But next time you're up and we're toying with going for summit to eat, we will consider a curry place very much an option from now on - there will be no more excuses now that you're as much of a curry-hound as the next man.