Stuff I Have Been Reading: Runefang


Runefang. Picked this up cheap at the Student Nationals this year along with the first two Age of Legends: Nagash stories. 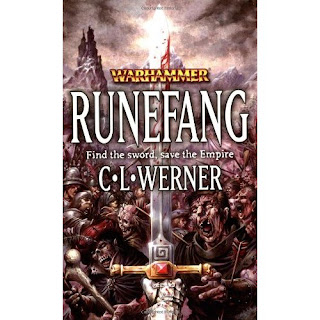 It's a quest for a maguffin - the missing Runefang of Solland, a former province of the Empire that was razed by orcs and subsumed by its neighbour, Wissenland. A Runefang is the magic sword each of the Imperial Electors (i.e. top noblemen) wields in battle, and this particular Runefang was half-inched by the orcs. Unfortunately it is the only weapon that can destroy the undead liche that is currently ravaging Solland and Wissenland.

Runefang is an odd book.

Firstly it is set during the Age of the Three Emperors, something I did not realise until half-way through the book when a Reiklander knight enters the scene and the various politics and multiple Emperors are finally mentioned. As such it possibly belongs in Games Workshop's Age of Legends line. Certainly I feel I missed the bit where this was explained to me, though I did wonder why none of the Elector Counts matched the Warhammer canon ones.

Secondly it (or perhaps I) cannot seem to decide who its main character is. Inevitably a rag-tag band of heroes are setup to find the Runefang. There's a baron, his deformed enforcer, several knights of the Southern Sword, a dwarven engineer, a Solland archer, a halfling cook/thief and his ogre sidekick, a witch of Morr and her templar bodyguard, and numerous men-at-arms lackeys. While they're off questing the book often shifts to the perspective of the heroic Count Eldeberd and his general who have to try and stop the undead army from razing Wissenland to the ground as well as stop the neighbouring province of Averheim from deciding now would be a good time to invade, settle some scores and liberate the peasants.

It's difficult to get attached to the large number of protagonists as many of them are dispatched with gusto that would make George R. R. Martin gasp. Also the quest seems a bit linear. Basically the witch and dwarf work out where they should go, they go there and find what they need. Perhaps both of these comments are due to the ~400 page limit that seems to dominate all game fiction books. Remember Game of Thrones might have a cast of 20 or so POV characters but those books typically weigh in at around 800-1,000 pages with smaller typeface.

Werner keeps it interesting - there is a twist in the quest for the Runefang, although one that means not much is resolved about the titular artifact (whose fate is pretty clear in Warhammer canon apparently). There is also treachery in the group as well as bandits, orcs and undead to assail the heroes and lots of mass combat against undead legions (though that boils down to the Duke trying X and it not working against the undead several times). However I feel the book really lacks a heart to it. There's perhaps too much emphasis on combat and battles than on making the quest really interesting but that is often a flaw with Warhammer novels. However it is a fairly vicious story in terms of body counts - don't get attached to any character!

Overall a reasonable read, but not Werner's best. I would also liked to have seen more of the politicking but I assume some of Werner's other Age of Legends books will cover this. It does make me sad that Chris Pramas's mooted Age of the Three Emperors sourcebook never came about during WFRP2E's development.
Posted by Stuart at 6:59 PM