This is an account of a game of Warhammer Fantasy Roleplay I ran on 9/7/2011. The scenario won the Black Industries scenario competition and all artwork was included with the original scenario by Charles Morrison. 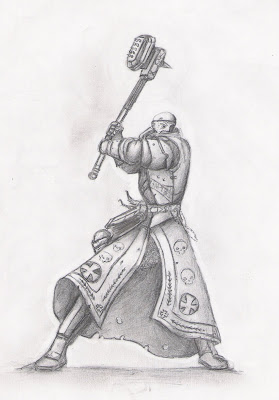 Axelbrand Riese awoke on the cold hard floor of a Talabheim gaol. His only company was the snoring dwarf who was face down in a puddle of urine until the jailer came to wake them. Axelbrand discovered he had been arrested for drunkenly singing lewd songs about Herr von Sachs, one of the city fathers, and the dwarf had taken exception to their attempts to silence the bard, injuring three guardsmen in his drunken brawl. The gaoler explained to them that with the city under threat of skaven attacks and with the Emperor making demands of the Elector Counts' men they were offering Axelbrand and his friend a pardon if they were to escort the Sigmarite priest Erasmus Heger and his ward, the lady Rosalin Faulkenheim to a meeting with two noble families that had been engaged in a 'private war' for years. Preferring not to rot the two agreed, and being introduced to Erasmus - a cold zealot - and receiving payment of 10 gold crowns in advance they assented.

Their equipment returned to them, Axelbrand and the dwarf, Thrumbor Grimigson joined the noble and priest outside the Temple of Sigmar and travelled north towards Hochland and the peace talks.

For the first night the companions stayed in a coaching inn - their only company the innkeeper, his barmaid, a drunken roadwarden and an imperial arbelester with whom Erasmus played cards. During the course of their meal the lecherous roadwarden made a pass at the barmaid, ripping her dress to reveal a monstrous green hand shaped growth on her left shoulder. The girl was a mutant.

Ignoring her pleas for mercy Erasmus insisted the girl be burned at the stake. Thrumbor readily assented, while Axelbrand felt some pangs of remorse but ultimately obeyed the priest's order to build a stake and gather wood. The arbelester, disgusted by the incident, gifted Axelbrand black powder to place round the girl's neck and kill her quickly. Axelbrand thanked the man and granted the girl a swift death. Rosalin fainted with the excitement, and after the burning discovered her room was downwind from the stake. Erasmus, in an uncharacteristic show of chivalry, swapped rooms with her.

The next day was uneventful and ended as the companions camped by the roadside. On the next morrow the company caught up with the carriage of the two noble houses, the Creutzfeldt and the Durrenbach. Erasmus left the group to join the Sigmarite initiates who dwelt within a third carriage, while Rosalin found herself talking with the Creutzfeldt captain, Arent Stretstorpe before joining the two commoners in conversation with some minstrels in the employ of the Durrenbach at the rear of the train.

The group learned that Jakob Creutzfeldt had been ordered by Elector Count Ludenhof to marry Darathee Durrenbac, herself a novitiate in the Church of Shallya, the Goddess of Mercy and Healing.

As the group talked Axelbrand noted a mutant approaching the train, a strange creature with eyes on each of his fingers. The creature rasped, begging for gold and received a thrown dagger from Axelbrand in the chest. A thick scaly carapace caused the otherwise expertly thrown dagger to clatter, and the mutant pocketed the dagger. Alexbrand was hit by the certainty there were more in the forest beyond the road Rosalin dropped gold at Axelbrand's feet. The many-eyed mutant cautiously approached and grasped for the gold, offering to return the thrown dagger in return for coin. While the creature returned the dagger to Axelbrand Rosalin grabbed a sword and swung at the mutant's head, severely injuring but not killing it. The creature's neck was scaled, and the scales acted as a gorget as they turned Axelbrand's blade.

More mutants crashed from the bushes to protect their injured comrade, startling the company, and they were joined by guards and mercenaries from both houses. However the many-eyed mutant was able to grab the gold and get to safety while the others backed into the scrub. For her trouble Rosalin was narrowly missed by a crossbow quarrel that embedded itself in the Durrenbac caravan. Axelbrand threw a knife at the mutants, but missed as the forest scrub provided them cover as they scurried to safety.

As the company took stock and Rosalin tried to persuade the guards to hunt down the mutants and retrieve her coin the cry from the Sigmarite caravan came that during the confusion Erasmus had been murdered. The company found three acolytes bearing the dead priest's large corpse out of the caravan. Axelbrand noted a faint piercing mark on Erasmus's corpse and concluded murder. This observation prompted recriminations from both families, and the party were introduced to Brigit Durrenbac and Jakob Creutzfeldt, the respective heads of the two families. Eventually it was decided by Reymer, the senior most acolyte of Sigmar, that Lady Falkenheim and Axelbrand would be best suited to investigate on his behalf, while Thrumbor would augment the guards. Each noble person would be guarded by one soldier from both houses companies. 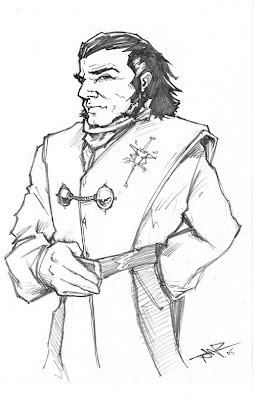 Returning to the minstrels at the back of the train the two investigators learned Jakob Creutzfeldt was ordered to force Darathee Durrenbach as part of the peace accord by the elector count. They said Darathee Durrenbach was a Priestess of Shallya who had taken the habit since the death of her young husband Helge. Jakob Creutzfeldt's father (also named Jakob) was ill with the pox and had not been in his right mind for several years. He was of course on the Creutzfeldt family estates.

Old man Durrenbach was said to have suspected his son Ruprecht wished him dead in order to gain control of the family and so had chosen Brigita to succeed
him. Ruprecht Durrenbach obviously still resented his sister because she was
chosen to lead their family instead of him. There were however rumours that Brigita was nymphomaniac, and her perversions marked her a follower of Slaanesh, the Chaos God of Pleasure, Passion, and Decadence.

They also mentioned the younger Creutzfeldt brother was in the company, along with his consort Grethe Rozenow, said to be a fortune teller.

The pair first went to Brigita, a stunningly beautiful woman clad in fine clothing sporting a small tiara, mark of female Durrenbach leaders. She had been in the coach with her brother, Ruprecht when the attack took place. She knew little, but suspected Friedrich as the pair had embarked on an affair six month previous, ending with her catching him in bed with her chamber maids. His hatred of her family knew no bounds and he spread foul rumours as to her virtue.

Next they spoke to Ruprecht outside the coaches, who also knew little but kept watching the baggage within the family coach. He did however pay lip service to the rumours regarding Brigita's inclinations, stating it was his duty as brother to protect her as best he could despite herself.

Then they spoke to the priestess, Darathee. She claimed to have seen a child in the woods during the beastman attack and had been slowly following him alone. Axelbrand noted she smiled when they mentioned the rumour of the forced marriage to Jakob, suggesting the marriage - and the end to her time in the clergy as an initiate of Shallya - pleased her.

The pair overhead Brigita questioning Jakob about mutant movements on his lands. Jakob listened to her concerns impassively but dismissed them, saying he had doubled the groundsmen on his lands to deal with the problem.

Speaking with Jakob the pair learned he and his brother had been within the family coach. Jakob also mentioned he had already proposed to Darathee and was to announce their engagement, stating they saw eye-to-eye on many matters.

His brother Friedrich was unwilling to be interviewed by Axelbrand and Falkenheim until they played him at cards. Friedrich, despite claiming this was a new hobby, took several silvers from the lady but graciously furnished the investigators with wine. He laughed at notions that his consort Grethe was a fortune teller, saying she simply practiced card tricks for his amusement. He also went over his relationship with Brigit, stating he had ended it because he grew bored of her, and intimating he had seen certain sigils and suchlike in her boudoir that lent credence to the rumours she may be a worshipper of Slaanesh.

The pair also spoke to the two captains of the guards - noting the Durrenbac had hired a mercenary captain, Everd Setzingen as their own house guard were garrisoned on their lands due to fear of the increased number of mutants on their lands. They learned Captain Arent had served in the Imperial Guard with Everd but his career had ended abruptly. An incident had occurred while their compsany was in Talabheim where Everd witnessed him attacking a priest of Sigmar, a priest of Sigmar named Erasamus Heger! 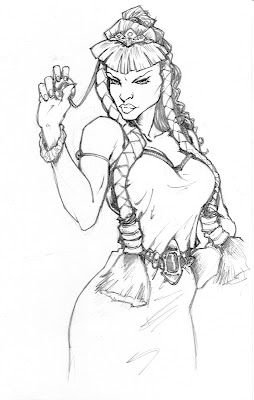 Realising there were many grudges between both houses the pair returned to the Durrenbac coach. They spoke to Brigita about Darathee and Rosalind persuaded her ot let them search Ruprecht's belongings. There they found a chest containing 500 gold crowns. During the excitement Axelbrand noted a piece of parchment in the folds of Brigita's dress. He clumsily removed the note and the outraged noble woman forced him and Rosalin from the coach. The note read:-

Ever since you were accepted into our Sinful Order, we have eagerly awaited your passage from Ignorance to Chaos by way of the Ritual of Initiation. That Time has now arrived. Please meet with your Superior at the Appointed Place when Morrsleib next waxes full.

Praise be to Slaanesh!

Having found something of note the pair hastily alerted Captain Arent and went to Reymer. Before long Brigita was accused of being a Chaos worshipper before the camp by the youthful initiate and was restrained within her coach, tied by silken ropes.

Returning to the coach, the two investigators searched her belongings and Ruprecht's clothing. In a secret compartment they found several drafts of the letter they had accused Brigita with. Realising they had been duped they showed her this evidence and attempted an apology. The proud noblewoman did not accept, particularly when they insisted she remain bound to keep Ruprecht thinking his plan had worked. They also queried her about Helge's death by poisoning and Brigita confessed, her emotions near breaking point, that Darathee had poisoned her husband and that Brigita had paid the imperial officials to find her innocent.

With this information the pair of investigators left the coach and eliminated Brigita from their list of suspects - but it seemed no-one was what they seemed, and that nobleman and commoner alike had secrets within this company.

Well written session. Loved to read it and am all eager to learn what happened next. You got me hooked for sure.

Thanks for sharing it.