A while back I got bored and made Doctor Who: Tardis Trouble, which for all its stolen graphics and the fact I've not quite uploaded the finished product wasn't actually that bad for a first attempt.

Anyroads over the last year or so I kind of realised that my ambition as always exceeds my grasp. I'd visions of churning out a regular series of games using the AGS engine.

I am going to have a 2nd bash at it - Doctor Who: Tales From The Time War. A small adventure set with the 8th Doctor at the beginning of the Time War (not the entire bloody thing!) 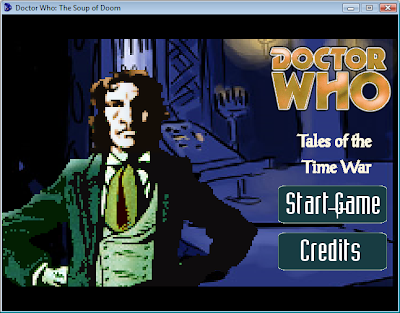 Last time some folk emailed me asking, "Why don't you use David Tennant's doctor?"

Because... I prefer the McGann doctor over the 'hip and modern' Tennant and there's no 'official' story for his doctor (though I believe he's the one who fought in the Time War and whoever wrote Doctor Who: The Forgotten agrees). It'd be easier to use Tennant though - there's a lot of art available to half-inch on the net. :)

The programming side is easy, even cobbling together the occassional object graphic to represent a bag of jelly babies, sonic screwdriver or other object is a doddle. People on the other hand take ages - mainly because I don't have a decent program to animate a walk cycle, and because my characters look an awful like characters from Indiana Jones & The Fate of Atlantis (the McGann is a paint job on the Indy sprite - I though I did a pretty good job hiding it, but there ya'go). I have toyed with learning Maya and pre-rendering 3D human characters in it to use in my adventure games, and possibly even pre-rendering 3D scenes by creating the same scene and rotating the camera to render "unique" scenes.

Are there any packages that make it really easy to customise and prerender a convincing 3D human (or humanoid) models?

In the meantime - here's one of my less 'convincing' creations, Rufus the Jailor (probably going to be replaced by a less interesting character):-

I find my own game design aspirations are limited by my lack of graphical skills; my interests are more in back end stuff and architecture.

What are you writing it all in?

It's written in AGS - which uses its own programming language akin to VB or C.