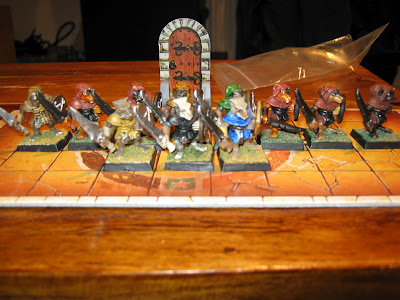 "Why did you get into roleplaying?"

It's a question I get asked a lot. Only by myself though when I hand over huge wads of cash for stuff that will inevitably sit on a shelf and see little use. But the answer is Advanced Heroquest was my gateway board game. Yes in true Kerrigan-tradition I started with Advanced Heroquest, not regular Heroquest. But then I always was truly hardcore.

At school in 1990 I was friends with a chap I shall give the not-so-subtle nom-de-plume Mr. Munro. One day I came over unannounced and he, his brother and his brother's best-friend were about to start playing a really elaborate looking game. I have no idea which character I got, probably the dwarf or the elf. I was however hooked. We played for about 2 hours, wandering around a randomly generated dungeon (which is one of the cool things about AHQ). I've no idea how we did, I do remember us finding a grate, seeing a room below it and deciding that as we didn't have a rope we'd go back to town and come back to investigate more fully on our next expedition.

Sadly we never had a 2nd expedition, and I spent a lot of time bothering Mr. Munro to dig the game out again and let us play. I think it put quite a strain on our friendship as he didn't like GMing. I remember one time my knight and 2 henchmen were pretty much wiped out in the first combat. I also remember us using the old Warhammer Fantasy Roleplay sewer floorplans and actually roleplaying non-combat encounters.

Naturally I wanted this game for myself. It cost a whopping £21.50 in 1990, and I got a mere 50p pocket money and could find no job beyond a few weeks temping as a paperboy. It's a testament to my frugality that I made it to about £18 before my uncle took pity on me and bought me it and the original Heroquest for my Christmas and birthday. Sadly both games did not survive the tender filing systems of teen-Stuart, along with Battlemasters.

Later during my PhD I made an attempt to recapture this game and memories with the magic of Ebay. I was scunnered, an 'appears complete' auction turned out to be missing half the game, including any doors hero figures. Then at Gen Con UK 2003, the one famously ran by Peter Adkison over Easter weekend (where I earned £100 in DMing vouchers, hardly anyone this side of the pond turned up and the trade hall ended up giving a massive slashing to its prices) I found another slightly more complete copy (still no doors). I also nearly discovered the concept of excess baggage on the flight home.

In retrospect I probably should have also bought Warhammer Quest as that's really shot up in price, but hey-ho!

On my most recent trip home I finally brought the boxed set and the expansion. I also decided that playing it with just the bog standard creatures is boring. In terms of miniatures the original Advanced Heroquest was incredibly limited.

On top of 4 heroes, and 12 sets of men-at-arms for the heroes to hire you got 20 identical skaven, with the option to use a different coloured base if an encounter called for a 'special skaven'. This could make the game get repetitive very quickly but they presumably assumed you had the original Heroquest which came with a varied assortment of monsters. By contrast Heroquest came with pretty much everything you needed in the box (hence why that game is probably more nostalgic for 99% of gamers). There are even rules to use everything that came with Heroquest, including the board!

Annoyingly I'm not sure where my copy of Heroquest is, but thanks to Ebay it is relatively straight forward to pimp by Advanced Heroquest and buy miniatures. Bear in mind, none of these are painted by me, and the majority of minis cost about <50p on Ebay. The aim was to get things that didn't come with HQ. This first post will cover mainly the heroes in the box and skaven.


Firstly the main characters that came with my second AHQ box:-
Currently only Heinrich Lowen, the Knight (and my favourite character, which is why I bought this game at Gen Con 2003 with its expansion) is painted. I need to get the elf, bright wizard and dwarf painted. These are also the only 2 henchmen I have painted.

I don't have my Heroquest, but I'd love to also get the 4 heroes (a barbarian, another dwarf, a wizard and a high elf) from that painted as they are also playable options in AHQ.


As I noted above, fighting hordes of unpainted identical plastic skaven bashing is a bit boring. The game does assume they are the primary antagonists, as evidenced by these 3 pages of monsters. You also only get 20 identical basic warriors, so the game was clearly geared towards collecting Citadel miniatures.For me in the 90s this wasn't possible. I didn't have wads of cash, and I couldn't paint very well. My skills have likely deterioriated since then, but thankfully there's Ebay!

Firstly for about £15 I managed to buy a ridiculous amount of painted Skaven that match the Advanced Heroquest skaven, as well as some new types. Firstly a small number of your bog standard splods:-

I've made the next lot Skaven scouts (basically in AHQ scouts are monsters who can open doors in an attempt to summon more monsters) as they look distinct from the warriors above, and I only have a few of them (scouts are understandably a rare encounter):-

Next up, Skaven Champions, basically your above average skaven fighter:-


Next we need a Skaven Warlord:-


I don't currently have any Skaven Gutterunners or Skaven Nightrunners, but I do have a rather nice assassin for Clan Eshin.


Skaven have a lot of weird rules for gunners, such as Jezzailachils teams. Currently I'm still in the market for some of those, but in the interim this warlock with a pistol can serve as the gunner, and I have a few broken skaven missing weapons to serve as his assistant.

Finally an overall leader, either to serve as Prazangor or the Clan Mors Warlord. I actually really like this piece (metal, got it for £1.99 fully painted as the sword was broken. The judicious application by the missus of superglue fixed that).

I really like this piece. The Spanish Toledo style breastplate (Estalian Toledo in the Old World) makes this guy look overtly bombastic and OTT. I can imagine him taking it from the corpse of some poor Estalian Diestro.

Anyroads, enough for now. Next time, more heroes and the hordes of Chaos!
Posted by Stuart at 2:37 PM

Hah you gotta go hardcore... the Toy store, kids game 'Heroquest' was actually pretty cool but it had nothing on Advanced Heroquest.

I love your Warlord btw - I picked up the Island of Blood set just for AHQ hah.