Peas and rice! As if Catherine Tate's return wasn't bad enough. One companion too many will be back for the new series of Dr. Who methinks!

Actress Billie Piper is to return to Doctor Who, the BBC has confirmed.

She will star in three episodes of the sci-fi drama, reprising her role as the Doctor's companion, Rose Tyler.

Rose's return will mean the Doctor has three assistants in next year's series - Donna, played by Catherine Tate, and Freema Agyeman as Martha.

Still recuperating I'm afraid, but enough time for a blog post on some internet TV I've been watching (Yes! I have internet again and can watch TV again for the most part. Yippee!)

Star Trek: New Voyages has released a new episode. It's called "The World Enough and Time". The crux of this is that in a freak transporter accident young Sulu is aged 40 years or so and is then played by George Takei for the remainder of the episode. This is pretty cool, but unfortunately the previous episode featured young Chekov contracting an aging virus and ages into Walter Koenig. Not that the original series didn't rehash concepts in rapid succession, the Menagerie and Court Martial occurred in rapid succession as if suspiciously using the same court set they'd obviously spent some dollar that needed a return.

Anyroads at over 60 minutes this is pretty good -- it's better than the Chekov episode simply because they killed Chekov off with his rapid aging and for some inexplicable reason he's as young as ever and alive in the next episode.

You can watch it here with Flash. I must confess to misgivings over the preview for the next episode.

The problem with previous Babylon 5 spinoffs is they've had a different feel to the original series (IMHO good in the case of Crusade, bad in the case of the Legend of the Rangers). Even more-so is the fact that each spinoff has from the word go had an "epic" premise. In Crusade it was a 5 year mission for a cure to Earth's plague. In Legend of the Rangers it was the Hand, a race more powerful apparently than the Shadows (who were supposed to be the most powerful and the last of the First Ones). This meant that when Crusade was cancelled and Legend of the Rangers failed to merit a series (quite rightfully, as I recall it was awful) this left a massive unresolved backstory in the B5 universe.

With the Lost Tales JMS has obviously learned from this mistake. The first Lost Tales is unabashedly small-scale in stature, with the first story relating to a demon aboard Babylon 5 while the second story relates to a Dead Zone-esque moral quandry in the vein of the old "if you knew Hitler as a boy and saw his future would you kill him?" Both stories are roughly 35 minutes in length -- shorter than an episode of the B5 series.

Not a lot of money was spent on this project. A lot of the sets are pure CGI. The first story features literally 3 characters - Colonel Lochley, a character introduced in Season 5 of B5 and carried over into Crusade that JMS obviously likes even though she's a poor man's Ivonova (she was left in charge of B5 at the end of the original series though, so her involvement isn't exactly inappropriate), the older gentlemen from "7 Days" as a very convincing and refreshingly wise and witty Catholic priest and a possessed man. The second story has 5 characters - President Sheridan, Galen (a very cool character from Crusade that JMS is taken with), a reporter, a Centauri Prince and Lochley briefly.

Very small scale, but ultimately entertaining. The writing is stellar, the dialogue witty and there are seeds for a larger plotline in there somewhere. There's also tributes to G'Kar and Dr. Franklin's actors who died in recent years.

If Lost Tales goes the way of Legend of the Rangers then I'll be disappointed - I hope there's more of these to come.
Posted by Stuart at 11:21 PM No comments:

The trailer for the new Dragonlance movie that's coming out in 2008 is here. If you're not in the know Dragonlance is the Dungeons and Dragons book range answer to the Lord of the Rings. This is the first in what will presumably be 3 animated movies. My impressions are the animation looks akin to the old D&D cartoon, except for the way-too jarringly different CGI for the dragons. But I'll see it - the story is pretty good.

Lucy Lawless (Xena) is playing Goldmoon, a character who largely becomes irrelevant after the first story, while Kiefer Sutherland plays Raistlin, a character who becomes increasingly important in the first books, and the focus of the second trilogy. Michael Rosenbaum is doing Tanis's voice which means, given how he voiced the Flash in JLU, Tanis probably speaks with a strong US accent. Hmmm...

They've made a sequel to Fear of Girls, which looks very very amusing. There's only a trailer so far...

Needless to say the movie is a bit unrealistic. I mean 3 female roleplayers? A gaming table where there's more girls than men? As if... :)

This film is a stroke of genius, Like-Fox!

Arr, there be 2 new episodes of Bus Pirates on the fine ship YouTube:-

A Study in Emerald

Watching TV's been difficult for a while, so I've been listening to a lot of audio drama. I listened recently to a Neil Gaiman short story called "A Study In Emerald". It's part of an anthology of HP Lovecraft meets Sherlock Holmes stories called "Shadows over Baker Street", a book I intend on buying at some point when I start earning money for unnecessary things like books, food and petrol.

Anyroads Neil Gaman made the short story available on his website here. It parallels the original Sherlock Holmes story, A Study in Scarlet, where Holmes meets Watson. Obviously Study in Emerald is somewhat different, but if you don't understand it (and you need to be up on your Holmes-mythos more than your Cthulhu) the Wikipedia page explains everything here.

By the way, does anyone think Neil Gaiman looks like David Schwimmer (Ross from Friends). I just don't see it, but my esteemed colleague, Dr. Steve thinks otherwise... you decide... 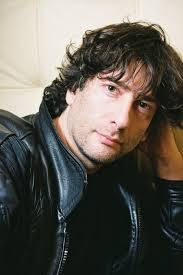 I've finally got round to listening to the rest of the Paul McGann plays as I rest up. It has to be said that a lot of the radio play blurbs sounded a little dull and out there in the 8th Doctor, Charley and dull-as-dish-water C'Rizz range. I was surprised that they were at worst average.

Time Works - the TARDIS materialises in a place where the people are virtually slaves to a race of clockwork men that exist out of phase with time and effectively eliminate those workers whose usefulness is at and end. The doctor gets puts in prison immediately... something that happens a lot in all these audios... Decidedly meh.

Something Inside - the Tardis materialises in the Cube, a prison for psychics that resembles the Cube from the movie the Cube. They get chased by something called the Brainworm. Surprisingly more compelling that the crap synopsis I have just given - I really expected this to be rubbish, but it wasn't. It's good.

Memory Lane - the TARDIS materialises in a prison that takes the form of a 1980s suburban street that stretches forever, with an ice cream van that swiftly steals the TARDIS and where every house houses an old lady watching the snooker and her inexplicably child-like adult grandson. C'Rizz is actually useful in this one. It's very good.

Absolution - this one is as I expected, bye-bye C'Rizz. Charley accidentally unleashes all the souls C'Rizz has been carrying around with him, hurtling the TARDIS into some sort of purgatory world of lost souls (yup, you could argue it's a prison again). C'Rizz then proceeds to become all-powerful, go bananas (much like he did in a couple of other stories) and kill a lot of people before the Doctor persuades him to stop and commit suicide. And this upsets Charley into leaving. It's okay, and presumably sets up Charley's final story.

As I've said before I think C'Rizz is as dull as dishwater as a chameleonic humanoid in an audio drama. The actor's voice never sounded particularly alien and he had a slight penchant for seeming shifty and untrustworthy. As to Charley, considering she has been a companion for 28 stories, it's also time for her to leave.

It's worth noting another season of McGann stories featuring Sheridan Smith have been commissioned - Dead London, Max Warp, Brave New Town, The Skull of Sobek (sounds like a Dungeons and Dragons module), Grand Theft Cosmos (a brilliant name but doubtless not involve the TARDIS shooting pimps and prostitutes), The Zygon Who Fell To Earth (a sequel to the Horror of Glam Rock) and a 2 parter called Kidnapped / Vengeance. Unlike before they'll be going on to CD before BBC 7 get their hands on them.
Posted by Stuart at 1:49 AM No comments:

Ideas Move at the Speed of Time

This commercial they made on the show is why I love the US version of the Office.

Politically correct it is not. (now fixed to actually play the movie)
Posted by Stuart at 12:40 AM No comments: